April 15, 2018
Around the Sophienburg, Sophienblog

Imagine it’s 1920. You’re making your way north on Seguin Street and you can just see the roofs of Landa’s flour mill and cottonseed oil gin over the tree line. You get to the “Y’ where Landa Street and N. Seguin split and you stay right because you’re going to catch the morning train to San Antonio on the Missouri – Kansas – Texas (MKT) rail line. The last time you came to the station was last year when you met your older brother coming home from France and The War to End All Wars.

The pale green “Katy” depot in front of you was built in 1900, on the ridge above the Dry Comal Creek, after tracks were laid the year before. The white NEW BRAUNFELS sign sits on top of the roof below a decorative diamond-shape attic vent which in later years would hold the MKT logo. Tracks run down the long sides of the depot because both freight and passenger trains use the station. Directly in front of you is the baggage area with double doors, but you are headed for the passenger waiting room. Here it gets tricky.

If you are white, you walk to the left side (trackside) and go in through the door with a white and black sign above the lintel designated WHITE. If you are black, you will make your way to the right side and enter through the door marked COLORED. In 1920, you still have to choose the correct door because “Jim Crow laws” (separate but equal) pertaining to train travel were passed in Texas in 1891. Those laws said “white and colored” could not share the same waiting room, water fountain or the same coach. This was true in most of the country. However, as early as 1893, black passengers began filing suit against the railroad companies when they had bought 1st class or Pullman tickets and had been moved to the black only coaches. More often than you’d think, the courts ruled damages be paid to the plaintiffs.

Part of the problem lay in the fact that some railways followed the Jim Crow laws and some did not; a black passenger would be allowed to ride in the car he purchased a ticket for, but when he changed lines, he might be asked to move. For the Pullman company, having a second set of coaches for segregation was just too costly so they tended to not enforce the rules as strictly. Then again, there weren’t that many people who could afford 1st class let alone that many prosperous black passengers.

Providing “separate but equal” coaches was the law, but railroad corporations usually just provided the “separate”. Black coaches did not always have working windows or a toilet. They were usually pulled at the front of the train where the soot and steam rained down on them from the engine; white coaches were attached at the rear where it was quieter and the air quality was better.

While economic concerns continued to push rail companies to disregard the Jim Crow laws in many states, it wasn’t until WWII’s need for national unity and economy that gradual desegregation on trains really took off. This happened sooner in Texas than in the rest of the deep South because of our military bases. However, waiting rooms and depot cafes continued to be segregated until desegregation legislation in the 1950s (Brown vs. the Board of Education) and the 1964 Civil Rights Act ended the Jim Crow era.

The Sophienburg Museum & Archives recently acquired the WHITE sign off the old Katy depot. The big Katy steam engine, No. 719, made its last trip through NB in April of 1952. By the mid-1960s, the MKT had abandoned the use of the depot. Standing proud but in disrepair, the old depot lost bits and pieces of memorabilia to the public. In 1969, the WHITE sign was taken off the building to be used in college American history classes. For 45 years, it has served as a tangible relic to impress upon students the injustice of segregation. Now at the Sophienburg, it will be used as an emotional survivor of our history.

The Katy depot building was eventually bought and moved over to Loop 337 to be used as a restaurant, but it was destroyed by arson soon afterwards. There may be other pieces of this building in New Braunfels homes, but as far as I know, this sign and a pair of doorknobs (NB Railroad Museum) found in its ashes are the only surviving artifacts. If you have stories, photos or artifacts regarding the rail roads in NB, please stop by the Sophienburg or the Railroad Museum and share your part of history with us! 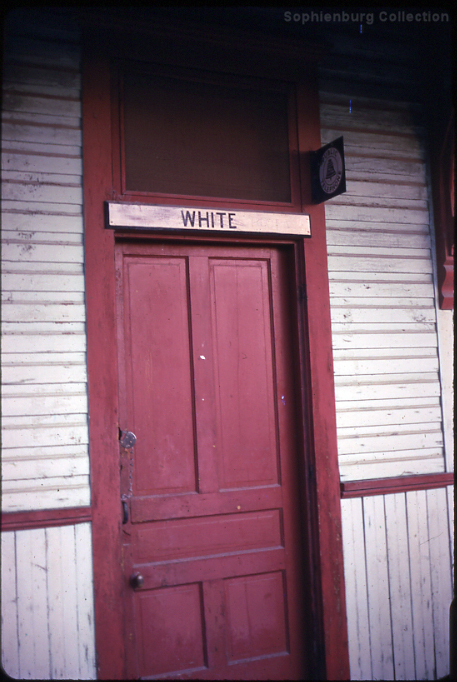 Your ticket for the: Depot sign returns to New Braunfels