One hundred years and one to grow on

March 15, 2020
Around the Sophienburg, Sophienblog 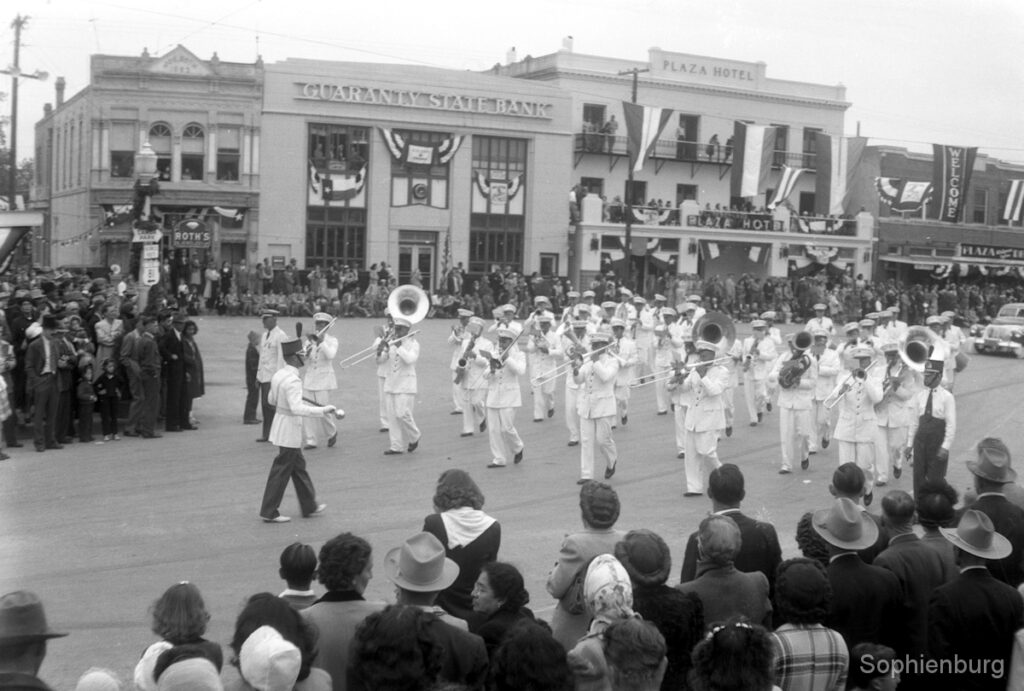 Spectators at the corner of West San Antonio Street and Main Plaza watch as a military band passes during the Centennial Parade in May 1946. (S465080-29)

New Braunfels threw a grand party for her 100th birthday. Just imagine what the 175th will bring. Join us for the Kindermasken and Founders' Day Parades March 21 in downtown New Braunfels. #happybirthdaynewbraunfels #innewbraunfels #ilovenewbraunfels #birthdayfireworks

Posted by Sophienburg Museum and Archives on Sunday, March 8, 2020

When New Braunfels turned one hundred years old in 1945, the U.S. was entering into its fourth year of World War II. Everything went to support the war effort, resulting in rationing of goods to the general consumer. Sales of new cars were restricted, and the speed limit was reduced to 35 mph to save gasoline (and you thought 55 mph was bad). People were required to present ration stamps for the purchase of things we use every day, including sugar, meat, butter, cheese, canned foods, and shoes. Even more difficult to come by, penicillin. Needless to say, there was no birthday party that year.

Come 1946, it was a different story! New Braunfels celebrated everything — the end of the war, the boys being home, and the belated centennial of the founding, all in a three-day extravaganza May 10-12. There was even a bonus celebration, the centennial of the city charter. Texas was a republic when New Braunfels was founded in 1845. Once Texas became a state, New Braunfels received her charter of incorporation as a precinct of Bexar County in May 1846. In August, Comal County was carved out.

In the weeks before the celebrations began, New Braunfels was transformed. Buildings and homes all along the parade route were decorated with red, white and blue bunting and freshly cut cedar garland. Patriotic banners were strung across the streets of downtown welcoming the more than 50,000 paradegoers. On the west end of the Main Plaza, the Centennial Committee had constructed a log cabin resembling the original government building named “Sophienburg” by Prince Carl. It was quite an attraction and made a dandy information and registration booth. Bleachers were set up in front of the courthouse for the honored pioneers and descendants with a reviewing stand just across the way.

The grand events began Friday on Main Plaza. Honored guests were marched from the Faust Hotel behind the Texas A&M College Band. It was estimated that more than 10,000 people gathered for a Welcome Home Party, where the public was invited to meet and greet the returned veterans, the pioneers (yes, there were some still around) and descendants of pioneers. Cases of bottled soda water were iced down for the crowd in front of the courthouse. The official opening of the Centennial Celebration was signaled by seven cannon salutes. The Honorable Coke Stevenson, governor of Texas, delivered a speech praising the spirit of the pioneers. Guests were then treated to an hour-long concert by the one hundred-piece Texas A&M College Band. The music of the garden party continued into the night, with dancing beginning at 10 p.m.

On Saturday morning, in what could be called a great Chamber-of-Commerce move, the businesses and industries of New Braunfels opened their doors for a public open house. There were also sightseeing tours to all points of interest in and around the city. At the same time, the Sophienburg Museum Garden was the site of a special program honoring early settlers and descendants of early settlers. As the day moved on, a late season norther blew in with dark clouds threatening the day’s list of activities. The fall-like weather did not seem to bother the visitors, the kids dressed as cowboys, Indians, clowns, Mexican vaqueros or their parents that lined up for the Kindermasken Parade. Area papers claimed that at least 500 children were expected to be in the parade to carry on the tradition of their parents and grandparents. At 2:30 that afternoon, the Centennial Children’s Parade stepped off behind the Texas A&M College Band. I wonder how many of those boys eventually became a member of that band. As it had for years, the parade began at the Academy Street Gym, winding its way through town, around the plaza and all the way into Landa Park for barbecue and band concerts. The biggest hit of the three-day celebration seemed to be the Comanche Indians. Special guests of the Centennial Committee, Chief Baldwin Parker, son of Quanah Parker and Cynthia Ann Parker, and members of the Comanche tribe traveled from Oklahoma. They camped in Landa Park the whole time, staying in teepees and performing authentic tribal dances at events each of the three days. My dad, who was about 12 at the time, told me about Indians being in Landa Park, but he could not remember why. This explains it. The second day ended with the Grand Centennial Fireworks, a band concert by the American Legion Band and dancing in the park.

Sunday’s festivities began in churches throughout town, with special memorial services honoring pioneer mothers and those who made the supreme sacrifice in service to our country. After church, everybody headed out to Landa Park for a huge centennial barbecue before the parade. The Grand Centennial Historical parade, began promptly at 3 p.m., and depicted the history and progress of the city over the past 100 years. Led by Grand Marshall R. R. Coreth on a milk-white steed, the parade contained 37 floats and 20 other entries, including gray-bearded Spanish-American War veterans and early pioneers, followed by the young ex-servicemen of WorldWar II. The floats were beautifully decorated, depicting early schools, churches, pioneer life and local industries The Dittlinger float had a cage of live chickens. There were ox-drawn wagons and beautiful palomino horses. There was marching music from one end to the other with the 36th Division National Guard Band, the Austin American Legion Drum and Bugle Corps, New Braunfels High School Band, and the Southwest Texas State Teachers College Band (now Texas State University). The brisk wind and light sprinkles failed to dampen the spirit of the participants or the estimated 50,000 spectators. The evening closed out with a concert at Seele Parish House followed by Centennial Dances in Landa Park as well as various halls around town. It was quite a celebration, unrivaled by any held before. And as the old society columns used to say, “A good time was had by all.”

Bring your pioneering spirit to the Kindermasken Parade followed by the 175th Anniversary Founders’ Day Parade. See you there!

Coronavirus Update: In the interest of health, safety and an abundance of caution all 175th-hosted events scheduled for March 14-22, 2020, celebrating the 175th Founding of New Braunfels have been postponed to September/early fall 2020. The rescheduled events are highlighted in the Since 1845 Calendar.

Your ticket for the: One hundred years and one to grow on

One hundred years and one to grow on