Sophienburg Museum and Archives > Blog > Around the Sophienburg > Women in history

April 12, 2020
Around the Sophienburg, Sophienblog 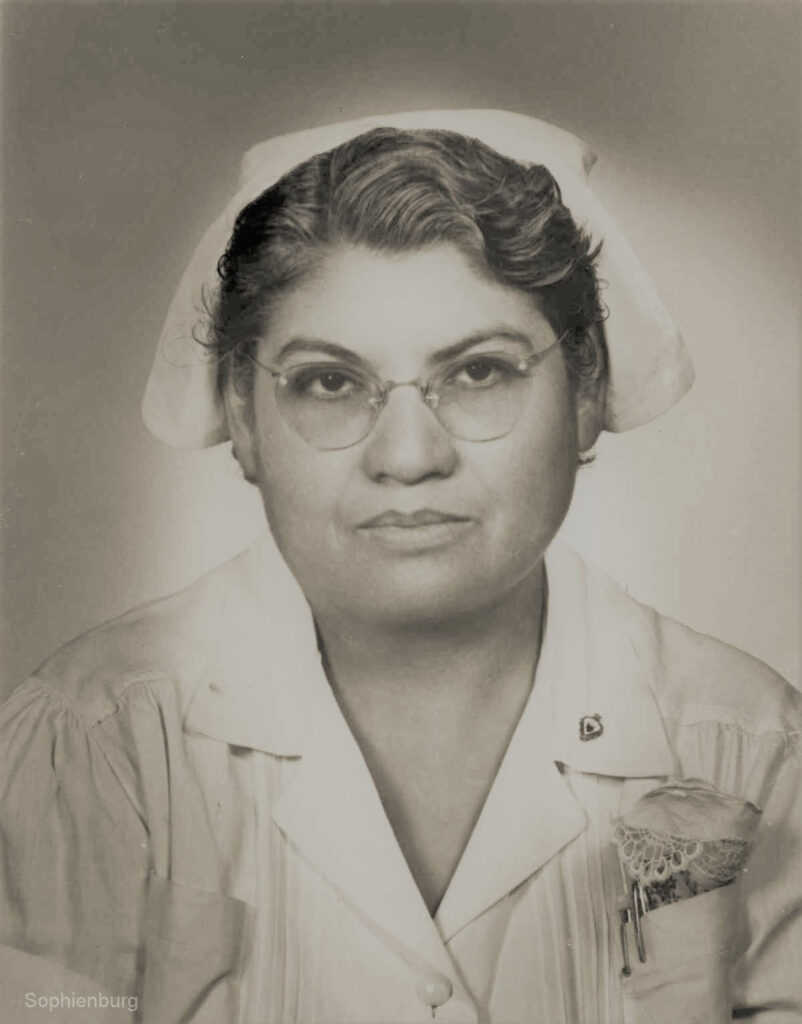 Lina Delgado, nurse and certified midwife, delivered more than 1,600 babies in more than 40 years of service.

When the Museum is quiet, like it has been for the past few weeks, I like being in the exhibit hall. In fact, my favorite thinking spot is sitting on a bench in there, just listening. In the silence, one can almost hear the sounds of New Braunfels’ past; the wheels of a carriage on unpaved streets or the voices of children responding to the old teacher’s bell. I seem to be drawn to the wall where our immigration story begins. As I stare at the whiskered faces of the town’s first leaders, I wonder about the women of the day. Do they only take honors for being strong pioneer women who love and birth children while tending the garden and the house? What of the first women leaders? The Archives hold their stories.

One of the first we hear about is Mrs. Margaret Ullrich. Her husband, George Ullrich was hired by the Adelsverein as the wagon master. Margaret and their 3-year-old child rode with him as he guided the first group of emigrants from the coast to their new home in New Braunfels. I’ve often thought about my Texas ancestors and I can tell you that riding and/or walking 150 miles up from the coast to New Braunfels is not my idea of fun, especially with a 3-year-old! Margaret and all the women that survived that trip get my vote as super-heroes.

Mrs. Louise Benner, wife of New Braunfels Postmaster Adolph Benner, became one of the first post-mistresses ever appointed in the United States (and first in New Braunfels) upon his death in 1857. Mrs. Benner served until after the Civil War, at which time she was promptly replaced by Christian Holtz. During Reconstruction, all public servants that had served in the Confederacy were replaced. Incidentally, there has only been one other woman to serve as postmistress in NB – Charlsie Witham in 1927.

Lina Chapa Delgado, born in 1906, was a nurse’s aide before becoming an LVN. She is thought to be the first Certified Midwife in New Braunfels. She delivered over 1600 babies in more than 40 years of service to the community. Her first delivery was Juanita Castro in 1931.

The roles held by women, mostly as nurses and teachers, slowly changed. The 19th Amendment, ratified in 1920, gave women equal rights to vote and serve on juries, but it took a while for that to make its way to New Braunfels. In 1951, Miss Etelka Lucas became the first City Corporation Court Judge (equivalent to our current Municipal Court Judge), a position she held until 1955. She was the first woman ever to serve in any judicial capacity in Comal County.

In January of 1955, Mrs. Robert (Gretchen) Uhr was the first woman juror ever seated in Comal County. In fact, the entire 6-person jury for which she was selected was all female, which was quite something for that time

Also in January 1955, Mrs. Frank Oprysnek became the first woman to serve on an official governing body of New Braunfels (before we had City Manager format). The 43-year-old widow of the late Commissioner Frank Oprysnek was appointed over nine other applicants to fill the unexpired term of her husband. The job paid $125 per month plus a $50 expense account. In today’s dollars, that would be approximately $1206 per month with a $482 expense account. Her duties as assigned by Mayor Schwandt included parks and plazas, cemeteries, city hall, library, hospital and sewage disposal plant.

In 1961, the first woman elected to the Comal County Board of School Trustees was Mrs. Robert (Bessie) Long, a former home demonstration agent and teacher.

There were plenty of women running in the most recent Texas primary, but it took a long time to get there. It was 118 years after the creation of Comal County that a woman was elected as Comal County Clerk. In 1964, Mr. Otto Rohde, the Clerk of twenty-five years, died. Mrs. A. D. (Irene Staats) Nuhn, long time county employee, was appointed to fill his position until the election. She subsequently ran and was elected, holding that position for 16 years.

1964 must have been a really good year for women because Mrs. Clinton (Margaret) Naegelin, retired schoolteacher, became the first woman elected to City Council. She also went on to become the first woman Mayor Pro Tem and Mayor, all within three years!

Women also began making their mark in the business world, in positions mostly occupied by men. Miss Angelina Morales succeeded her father, Charlie Morales, as manager of Morales Funeral Home in March 1969. She was the first woman mortician and funeral director in New Braunfels.

In 1970, accomplished artist and realtor, Mrs. Claudine Hovestadt, was elected first woman president of New Braunfels Board of Realtors. Women were not just moving up locally. Mrs. Harry (Clara) Heidemann, President & manager of Natural Bridge Caverns, which was dedicated August 5, 1964, was elected the first Woman President of National Caves Association in 1971.

The last on my list of firsts is Olivia Perez. She made her mark by becoming the first female patrol officer of New Braunfels Police Department in 1976 while proudly carrying on her family’s tradition of law enforcement (like her two older brothers). Perez was one of three females in the Police Academy, but she scored the highest marks of all 33 students in her class.

These first women paved the way for others. Their service to our beloved community really prepared the way for all of us as we strive to make New Braunfels the best it can be.

Your ticket for the: Women in history