Sophienburg Museum and Archives > Blog > Around the Sophienburg > Armistice

October 29, 2017
Around the Sophienburg, Sophienblog

“The leaves had fallen from the trees of Compiegne Forest at Rethondes, where two railway trains waited in the dawn mist. It was close to 5 a.m. on November 11, 1918. In a car of one of the trains sat a tired group of men about to sign a document over which they had haggled through the night. There was no riding up of generals on spirited steeds, no surrendering of swords, but soon, at 11 a.m. the greatest war in history would be over. The Germans, who had plunged into the struggle with heady optimism, were beaten, and Matthias Erzberger, leader of their delegation, knew he must yield to Marshal Foch’s demands…both German and Allied soldiers along the lines [would feel] an unforgettable joy and relief that, at last, all was quiet on the Western Front.”
— Texas Legion News, Nov-Dec 1968 – 50th Anniversary of the Armistice.

At about 7 a.m. on Monday, November 11, 1918, the news of the Armistice began to spread its way rapidly through New Braunfels, Texas. First, steam whistles began screeching followed quickly by the tolling of church bells. The fire stations started ringing their bells and children began setting off firecrackers. The cacophony of spontaneous celebration brought first a few hundred then thousands of people out into the streets to congregate at the Plaza.

Soon, red-white-and-blue banners and countless American flags were going up on business fronts and the porches of private homes. Automobiles, bicycles, and wagons, decorated with flags, were vying for space on the already crowded city streets. The telephones were ringing incessantly, spreading the joyful news to those out of town in rural communities, encouraging them to become a part of the day which had become “a Victory Holiday.” And on everyone’s lips were the words, “The War has ended!”

At 3 p.m., Senator Martin Faust kicked-off an impromptu city celebration at the Bandstand. The Choral Club began singing the National Anthem and was immediately joined by the voices of the gathered citizens “with a spirit and understanding as it had possibly never been sung before.” Pastor Mornhinweg delivered the invocation followed by Pastor Konken’s “impressive victory oration” emphasizing the world-wide responsibilities of the victors towards the vanquished.

Mrs. Blumberg and Harry Landa stressed passionate participation in the United War Work Campaign to support the “continued needs of our boys ‘over there’ during their constructive work…and the need to provide encouragement and moral aid for our brave boys until they are able to return to their homes.”

After the speakers, a grand foot parade marched from the Plaza along San Antonio Street, left on Castell, left on Church, and finally, left again on Seguin to get back to the Plaza. The procession of exuberant, flag-waving citizens was joined by bands and singers and even “men whistling.”

The merry-making of the day was followed by an evening church service “filled with worshippers who represented all creeds and denominations in the city.” Instead of preaching, there was “prayer and song and thanksgiving unto Almighty God.” People “wept and laughed in the same breath.” Like their efforts in raising funds for war bonds, New Braunfels “went over the top” in its celebration of the Armistice.

Over 500 young men from Comal County had enlisted or been drafted to become part of the American Expeditionary Forces in France. Some of these boys were killed in action while others died of wounds later in hospitals. Men also died of illnesses such as influenza, pneumonia, and pulmonary problems due to gas inhalation…and one drowned when his transport ship was torpedoed by a German U-boat.

After the Armistice, the red poppy came to symbolize the blood shed by young men such as these while protecting Americans’ freedom. In November 1918, a young teacher, Moina Michael, was moved by the John McCrae poem, “In Flanders Fields.” She bought dozens of silk poppies from a department store and began giving them out, asking people to wear them as a tribute to the fallen men of the war. Moina, known as “the Poppy Lady”, would spearhead the campaign that resulted in the adoption of the poppy as the national symbol of sacrifice. In 1923, the little red poppy became the official flower of The American Legion Family in memory of the soldiers of WWI. Since the 1920s, the paper poppies have been constructed by veterans under the supervision of the American Legion Auxiliary. Poppies are distributed mainly on Memorial Day and Veterans Day. Donations raised by the poppies support active-duty military, veterans, and their families. FYI: Armistice Day became a national holiday on November 11, 1938, and was renamed Veterans Day in 1954 to honor all veterans of all wars.

The New Braunfels story of WWI is being told in several ways around our city. Exhibits in the local museums, such as the Sophienburg, are explaining the uniqueness of our participation. The NB Library and other organizations are sponsoring programs and events to highlight — and honor — the contributions of soldiers and citizens in this war and all others since.

The Sophienburg would like to encourage you to honor your family’s servicemen and women by bringing in a photograph of them to post on our “Poppy Wall”. Beginning in November, a special room off the Museum’s foyer will have cork board walls for you to attach your hero’s photo. We will even make a copy for the wall, so you can keep your original. There will be a table with labels for you to fill out your veteran’s name, war, and anything else you would like to share and add to the photo. When the “Poppy Wall” comes down in 2019, the photographs and information will be added to our Veterans Database so future generations will always remember their service and sacrifice.

This November 11, take time to get a red paper poppy, make a donation, and wear it proudly. Please choose to honor the men and women who willingly fought and those who continue to fight for the freedoms all of us enjoy. 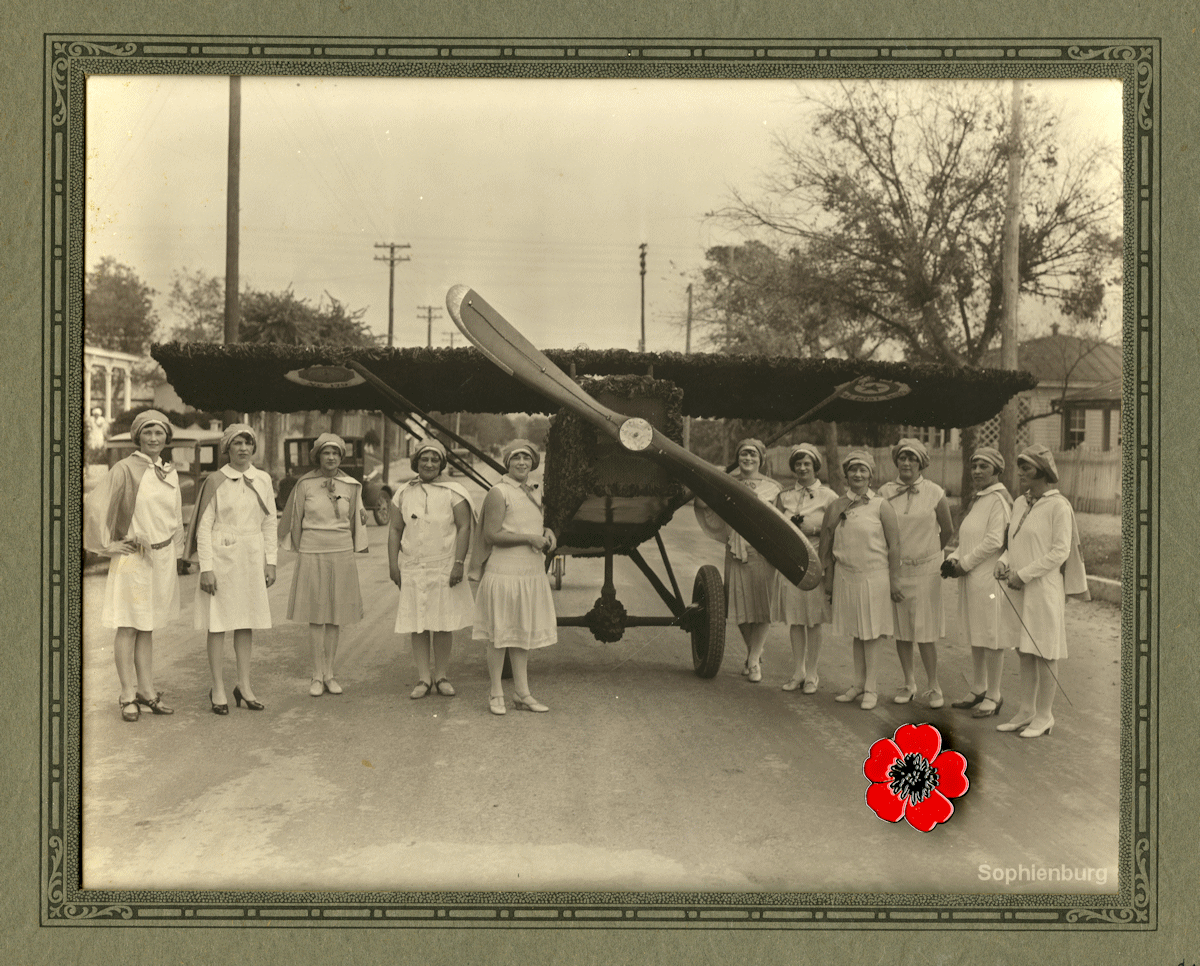 Your ticket for the: Armistice