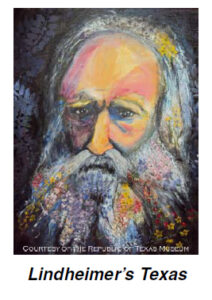 Lindheimer’s Texas highlights the contributions of Ferdinand J. Lindheimer, The Father of Texas Botany. This immigrant from Frankfurt, Germany, lived and collected in Central Texas and pioneered the sciences throughout Texas along with some lesser-known 19th century naturalists.

In his book Naturalists of the Frontier, Samuel Wood Geiser, chair of the Biology Department at Southern Methodist University from 1924-1957, published essays on 11 men who were influential not only in scientific fields but in their civic and business contributions in the newly annexed State of Texas.

… While the naturalists of the Texan frontier are of interest to the historian of science … their careers must be considered always in the light of their social environment. I stress this fact because the historian of scientific exploration in frontier Texas is constantly tempted to deal at length with the social history of the regions as well …. Social conditions in early Texas offered many obstacles to the naturalists' work … while their achievements were due largely to traits of character inherent in the men themselves, their failures were due in almost every case to the environment.

Geiser published two subsequent essays which expanded the list to 343 naturalists who visited and/or lived in Texas between 1820 and 1880. These men and women, from many nationalities, were “writing the book” on 19th century Texas—its flora and fauna, its climate and indigenous cultures, and its geology and geography—by publishing books, essays, treatises, guides and maps, by writing innumerable letters, and amassing and dispersing large collections of herbaria, reptiles, insects and drawings of their discoveries. Eventually, Geiser's list contained over 2,000 names. 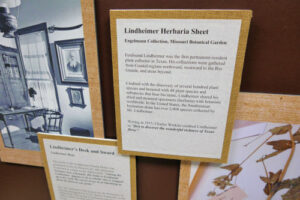 Many of these naturalists traveled and collected as a hobby, their occupations as varied as the fauna and flora they were recording. They held positions of leadership in their towns. They were simple farmers. They were doctors and newspaper editors. They were teachers. Mostly, they enjoyed a passion for the land around them and wanted to share this new knowledge with others.

This is important. These people were giving the rest of the United States and the European continent the first real look at a vast, unique, unexplored, unpopulated, and unimagined Texas. Their descriptions, drawings, and specimens paved the way for future explorations and settlement and fired dreams of freedom and prosperity in the minds and souls of 19th century immigrants.

In the exhibit are plant specimens sent by Lindheimer to his fellow Frankfurt native, botanist and friend Georg Engelmann in St. Louis. Much of Engelmann’s collection is now at the Missouri Botanical Garden, which has graciously allowed the Sophienburg to include a good sampling of Lindheimer’s herbaria sheets in this exhibit. Lindheimera texana, the plant Ferdinand Lindheimer referred to as his “immortal daughter,” are among herbaria sheets on display.

The Sophienburg Museum has partnered with New Braunfels Independent School District to develop a web-based curriculum featuring Lindheimer and the 19th-century German-Texan naturalists available to third-grade through fifth-grade teachers nationwide. This program is made possible in part by a grant from Humanities Texas, the state affiliate of the National Endowment for the Humanities. A new audience will be introduced to the Father of Texas Botany through the donation of a set of 28 informational cards about Lindheimer and other Texas naturalists to more than 2,100 Comal County fifth-grade students. The card set includes color images of Lindheimer’s senna, daisy, beeblossom, muhly, morning glory and, of course, the prickly pear cactus.

Spring 2016 will provide a culmination of the early naturalists’ celebration. Visit Folkfest in April at New Braunfels Heritage Village to learn about the importance of bees and beekeeping. Enjoy Herb Fiesta in May hosted by the New Braunfels Conservation Society, along with a commemoration of Ferdinand Lindheimer’s 215th birthday at his historic home. Find a complete list of related events at www.sophienburg.com.

We invite you to experience Lindheimer's Texas expertly curated by Keva Hoffmann Boardman and sense the passion these early pioneers had for exploration and learning about the world around them.

Your ticket for the: Lindheimer’s Texas