Sophienburg Museum and Archives > Blog > Around the Sophienburg > Birds of War

August 20, 2017
Around the Sophienburg, Sophienblog

Whether winging their way through barrages of shells, dodging shrapnel, maneuvering through clouds of gas, or flying through torrential downpours of machine gun and anti-aircraft gun bullets, pigeons were feathered aviators that played an essential role in the Great War.

Both the Greek and the Roman armies used homing pigeons in warfare. Hannibal carried baskets of pigeons with him as he crossed the Alps to send messages back to Carthage. Although the US tried to integrate pigeons into the Signal Corps during the US war with Mexico, it wasn’t until WWI that Washington scoured the country for good homing birds to send to France. The A.E.F. organized pigeon companies following the lead of successful French, British, Russian and Italian army enterprises.

Pigeons did their bit when German barrages knocked out all lines of communication between the front and general headquarters. They carried messages at the first Battle of the Marne, aided the British in the capture of Neuve Chapelle, and died alongside British “Tommies” when the Germans used poison (chlorine) gas for the first time at the second Battle of Ypres.

Pigeons were used by all branches of the service, but most were quartered with the infantry. There would be a man in each company assigned to carry several pigeons in a basket upon his back. After Ypres, the baskets and cotes were fitted with covers to protect the birds from gas attacks. The birds remained on duty in the trenches for 4-5 days before they received R & R back at headquarters.

The birds were kept in wheeled cotes about 8 to 10 miles from the front lines; each cote contained about 75 birds. Moving with the armies, the birds would learn to know their new “home” in 7-10 days. Carefully coached by their keepers, they were first released 100 feet away to fly back, then 1000 feet, and later 3-4 miles away to learn the way “home”. They were taught to enter the cote immediately upon arrival and to ring a bell so messages would be received in a timely manner.

Pigeon messages were coded and written on fine tissue paper folded inside a leather wad. The wad was inserted into an aluminum holder seared to the bird’s leg. When released, the pigeon would fly straight up, pause to get his bearings, then fly in the direction of “home”. The Germans assigned snipers to shoot down the birds when they paused at the top, so pigeons were taught to keep spiraling.

There were many famous birds during the war. “Cher Ami“ saved the “Lost Battalion” in the Argonne with a shot leg and a bullet in her breast bone. “Le Cirq” helped capture a German U-boat. “Babette” carried a message that stopped a surprise German attack on the Meuse. “President Wilson” was shot in the leg carrying the message that saved his outfit; he was “too good a soldier to be invalided home”. After his leg healed, he was assigned to a division of tanks where he carried messages from the tanks back to the artillery line giving exact locations of hidden machine-gun nests. The service of these and many other birds literally saved the lives of thousands of soldiers.

Naval patrol boats and airplanes also carried pigeons. Birds flew back to the beaches with the locations of downed planes and torpedoed boats thus saving the crews. And they flew fast … “Red Cloud”, assigned to the US Navy, once flew 535 miles in 10 hours and 20 minutes breaking the world record!

The Sophienburg Museum & Archives holds the microfilm collection of the Neu Braunfelser Zeitung, the New Braunfels Herald, the New Braunfels Chronicle, and the New Braunfels Herald-Zeitung. I looked up pigeons in the partial index and found out that in the 1870s, men were already keeping birds in cotes and trading/buying them. When Dr. H. Grube purchased 4 pair of carrier pigeons from St. Louis in November of 1895, it made the newspaper. He made news again when he took his trained birds to Anhalt, 25 miles from town, and released them. They arrived back home in 20 minutes…way before he made it back to town on horseback.

In 1903, in an article claiming “first wireless telegram to New Braunfels”, Richard Scholl received a telegram from San Antonio. The telegram did not come via the Marconi system but by carrier pigeon. His uncle had taken a bird to San Antonio, attached the telegram, and let it go at 9 am; by 1 pm, it was “home” safe and sound.

Who in your family raised and raced pigeons? Share your stories and photos with the Sophienburg by contacting us at archives@sophienburg.com or calling 830.629.1572. 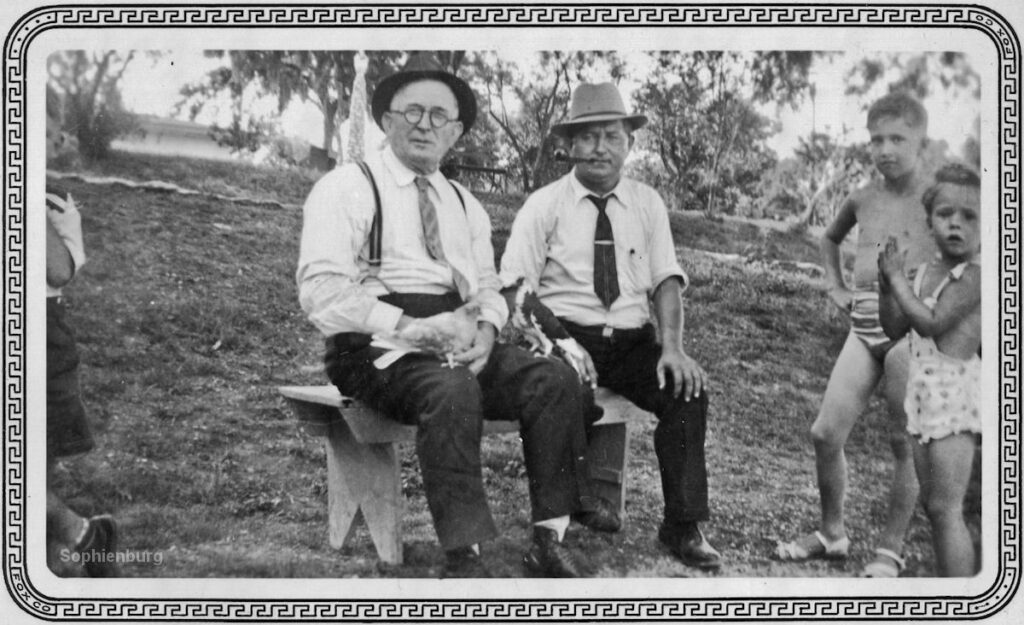 Your ticket for the: Birds of War