Sophienburg Museum and Archives > Blog > Around the Sophienburg > Bridging the river

October 13, 2019
Around the Sophienburg, Sophienblog 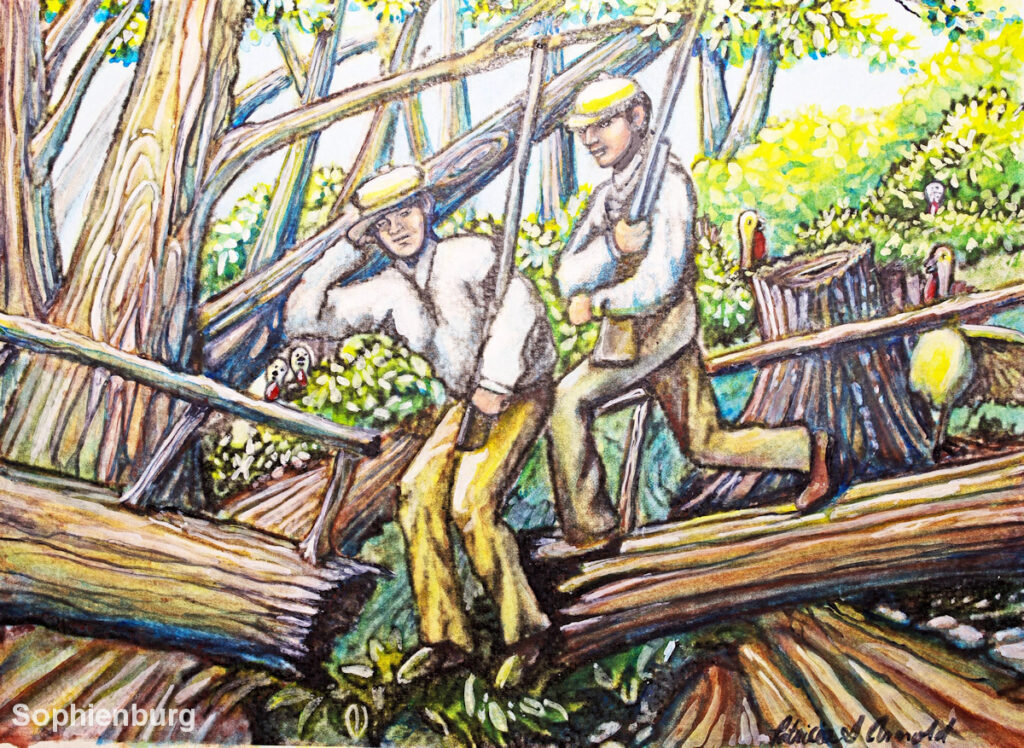 The painting by Patricia Goff Arnold shows her rendition of the pecan bridge with the two Goldbeck brothers.

Before the building of bridges, do you wonder how in 1845, people managed to cross from New Braunfels to Comaltown and back? The answer is that before the building of Clemens Dam, the water was shallower and there were several low-water crossings. Small islands on the Comal River, long disappeared, allowed people to just walk across.

The first bridge crossing between the two communities of New Braunfels and Comaltown was made of two pecan trees. It was appropriately called Pecan Bridge. According to early historian Hermann Seele, there was a foot bridge where the present Bridge Street meets the Comal. Seele tells us that there was a small island in the water where the Comal Creek and the Comal River merged above Clemens Dam. Early maps show where this little island was located. Two large pecan trees had been felled on to the island from the banks and this was the Brücken (bridge) that connected New Braunfels with Comaltown. In Oscar Haas’ translation of one of Fritz Goldbeck’s poem, Goldbeck says that often he and his brother crossed this bridge at the break of day to shoot wild turkey-cocks that came nightly to roost in the pecan forest on the opposite bank of the Comal (Comaltown). Pedestrians crossed back and forth from New Braunfels to Comaltown by holding on to handrails. History tells us that pecan and elm trees made up much of the forests of Comaltown.

The first bridge to accommodate wagons was built by the city in 1856. This bridge, made of timber, was located diagonally from the foot of Mill Street to the north edge of San Antonio Street. After ten years another bridge was built there in 1866 but was partially destroyed by the flood of 1869. This bridge was consequently repaired only to be completely torn away by another flood in 1870. The city then built an iron bridge in the same spot; it was also washed away by flood in 1872. This whole saga seems almost unbelievable.

Merchant C.C. Floege built a low-water crossing in 1872 that lasted until 1894 when it was replaced by a high-water bridge built from scrap metal salvaged from the Chicago World’s Fair. Then in 1923, the present concrete bridge was built. It has been used since that time and is the one being reconstructed now (2019). Wouldn’t you say that it has served New Braunfels well?

When you are standing in the middle of the concrete bridge, look over to the left towards the Tube Chute. That’s where John Torrey’s mill was located. John Torrey was a prominent figure in early New Braunfels. He owned a great deal of land in Comaltown and donated the land for the Comal Cemetery. Torrey Street and Torrey Park are named after him.

Torrey was a true industrialist. He entered into a lease agreement in 1848 with Hermann Spiess, trustee of the German Emigrant Co., to build a mill. Understanding the power of water, he built a dam in order to use water power to run his mill. He built a saw and grist mill and later added facilities for the manufacture of wheat flour and a shop for making doors, sashes and blinds. The top story of the mill was destroyed by fire in 1861. Torrey then added a three-story stone building. In 1872 a cloudburst caused a flood, tearing the foundation and destroying the rebuilt dam. You can still see remnants of the foundation at the Clemens Dam. lt has been said that fire, wind, and water plotted against John Torrey’s efforts on the Comal River. That three-and-a-half-mile river just wouldn’t give up.

John Torrey finally did give up his battle with the river and sold his property to banker William Clemens. In those days, owning property on the river meant that you also owned the water. Clemens built the dam in 1882 out of stone that was from the same quarry used to build the Comal County Courthouse. The dam stood idle until 1886, when Clemens secured a contract with the City of NB to furnish water for the first waterworks. This arrangement continued until the city purchased their own waterworks at the head of the Comal Springs at The Headwaters. Clemens Dam became idle with much of its upper structure removed. During World War II, as much scrap metal as possible was removed for use in the war effort. Who would have dreamed that this old dam could become the Tube Chute — one of the top tourist attractions in Texas?

The necessary renovations of the San Antonio Street Bridge forces the city to keep it closed until it once again becomes usable. Detours are necessary. One of the main detours is over the concrete Garden Street Bridge. The Garden Street Bridge was built in 1931. If you are not familiar with it now, you will be because it is a main detour route over the Comal River while construction is happening. The Garden Street Bridge was designed by architect Jeremiah Schmidt, a well-known designer of structures in New Braunfels. My grandfather, A.C. Moeller, was the contractor for the construction of this bridge. He and the other Moeller brothers were definitely involved in the building of some very important bridges and buildings in New Braunfels and Comaltown. Next time I will be telling you about the Moeller brothers and their legacy in New Braunfels.

Your ticket for the: Bridging the river