“He Got the Drop on Waldrip”

October 14, 2018
Around the Sophienburg, Sophienblog

I found this story by Louis B. Engelke in the Sunday, January 3, 1954, edition of the San Antonio Light. It’s the story of Henry Langerhans and the part he played in the demise of Capt. J.P. Waldrip. It is really too good not to share in its entirety.

The death of Capt. J. P. Waldrip occurred in 1867, two years after the end of the Civil War and two years after Waldrip had been indicted as a wanton killer. In fact, Waldrip’s entire gang, known as “Waldrip’s Wolfpack,” was indicted for “mob murder” as soon as the Fredericksburg Germans could emerge from a reign of terror which ended in 1865. For a period of four years, the pro-slavery Waldrip gang had killed one anti-secessionist German after another. Victims were usually seized at night and hanged or tortured to death before the eyes of their wives or children. During the war years, no one dared to seek an indictment against Waldrip. That’s why the action waited until 1865. Even then, it was a dangerous procedure, for some of Waldrip’s men still lurked on the highways and byways of the county, and continuing post-war murders were attributed to these die-hards. Consequently, with typical German thoroughness, Gillespie County declared Waldrip “Vogels-frei,” which in German means ”free as a bird” — to shoot of course.

Why Waldrip left his hideout 10 miles east of Fredericksburg and rode into town on a sway-back mule that fateful day in 1867, nobody really knows. Perhaps it was to burn the courthouse, or more likely to steal a horse. But whatever the reason, an unknown party in Fredericksburg wired Capt. Phillip Braubach in San Antonio. The message brought Braubach, US Customs collector for the Western District of Texas, riding as fast as a horse could carry him to Fredericksburg.

A native of Wiesbaden, Germany, who had settled in San Antonio in 1850, Braubach had served with McCullough’s Texas Rangers…he was arrested by Confederate agents in Fredericksburg, where he had been visiting his fiancé, Fraulein Louise Schuetze, when the Civil War broke out. Taken to San Antonio, a ball and chain was fixed to his leg and he was given the then odorous job of cleaning up the San Antonio River. Braubach eventually escaped to the border, where he formed an anti-Confederate company of Mexicans.

Becoming lovesick for Louise, Braubach finally decided to risk a trip to Fredericksburg, but Waldrip learned of Braubach’s visit and raided the Schuetze farmhouse. Not finding Braubach there, the gang murdered Louise’s father. Vowing to avenge Herr Schuetze, Braubach headed back for the border and later made his way to New Orleans where he joined the Union Army, rising to the rank of captain. After the war, Braubach returned to Texas and married Louise. They were living in San Antonio when the important looking telegram arrived late one afternoon. Braubach calmly told his wife he had some “business to tend to in Fredericksburg,” and departed on a fast horse.

Never having seen Waldrip before, Braubach entered the Nimitz Hotel before high noon the next day with one hand on [his] Colt revolver. Nothing happened when he entered the lobby so he next entered the hotel’s saloon. The only person present was the bartender who he knew.

“Where is he? How can I identify him?” Braubach asked.

The bartender said Waldrip was wearing a big black beaver hat and had gone west on Main Street. Braubach circled north around a two block section, so as to meet Waldrip face to face. The pair met 150 yards west of the hotel in front of Brockman’s store.

Waldrip by now was running as fast as he could toward the Nimitz Hotel with half the village, including Braubach, who was shouting for somebody to throw him a rifle, after him. Women, who had ventured onto the street to catch a glimpse of the notorious criminal, were now fleeing in every direction. Among them was Mrs. Henry Langerhans, with two-year old Bertha in her arms.

Observing Waldrip wrestle with a man for a gun at the hotel and seeing his wife and Bertha still on the street, Henry Langerhans, standing in the second-story window of his boot and saddle shop, kitty-corner from the Nimitz Hotel, reached for the Kentucky rifle he had used in many a Hill Country turkey shoot.

Waldrip went through the hotel, with Braubach, who now had a Winchester rifle, after him. Waldrip, holding his shoulder where Braubach had winged him, then came vaulting over the hotel’s high stone fence. Langerhans saw Waldrip take refuge behind a great oak near the fence. Waldrip raised his head and looked in one direction then another. If the man was ever to get a horse, he had to get it now.

It then dawned on Langerhans that Waldrip might possibly grab his wife and child as hostages. Taking careful aim with the long rifle, Langerhans fired. Waldrip toppled into the ditch. Everybody in town looked at Waldrip’s body, particularly the hole in his head, but nobody knew who fired the fatal shot. Nobody but Langerhans and his wife, that is.

Mrs. Langerhans kept the secret from her [eight] children until her husband, the man who had got the drop on Waldrip, died of natural causes. One couldn’t be too cautious when dealing with any of the Waldrips. Even those who had the protections of public office knew that. This was evidenced by the fact that Gillespie county officials waited until 1874 before they paid Charles Basse $10 for hauling the body of the notorious outlaw 300 yards in a wheelbarrow from the Nimitz Hotel to an unmarked grave on Town Creek. Afraid of the werewolf of the Hill Country? Perhaps.

And to top everything in the Waldrip saga is this weird touch. They buried Waldrip with his big, black beaver hat. Two years later, Waldrip’s brother, who somehow had learned exactly where Waldrip was buried, sneaked into town by the dark of the moon and resurrected the hat.

That, my friends, is entertaining journalism! 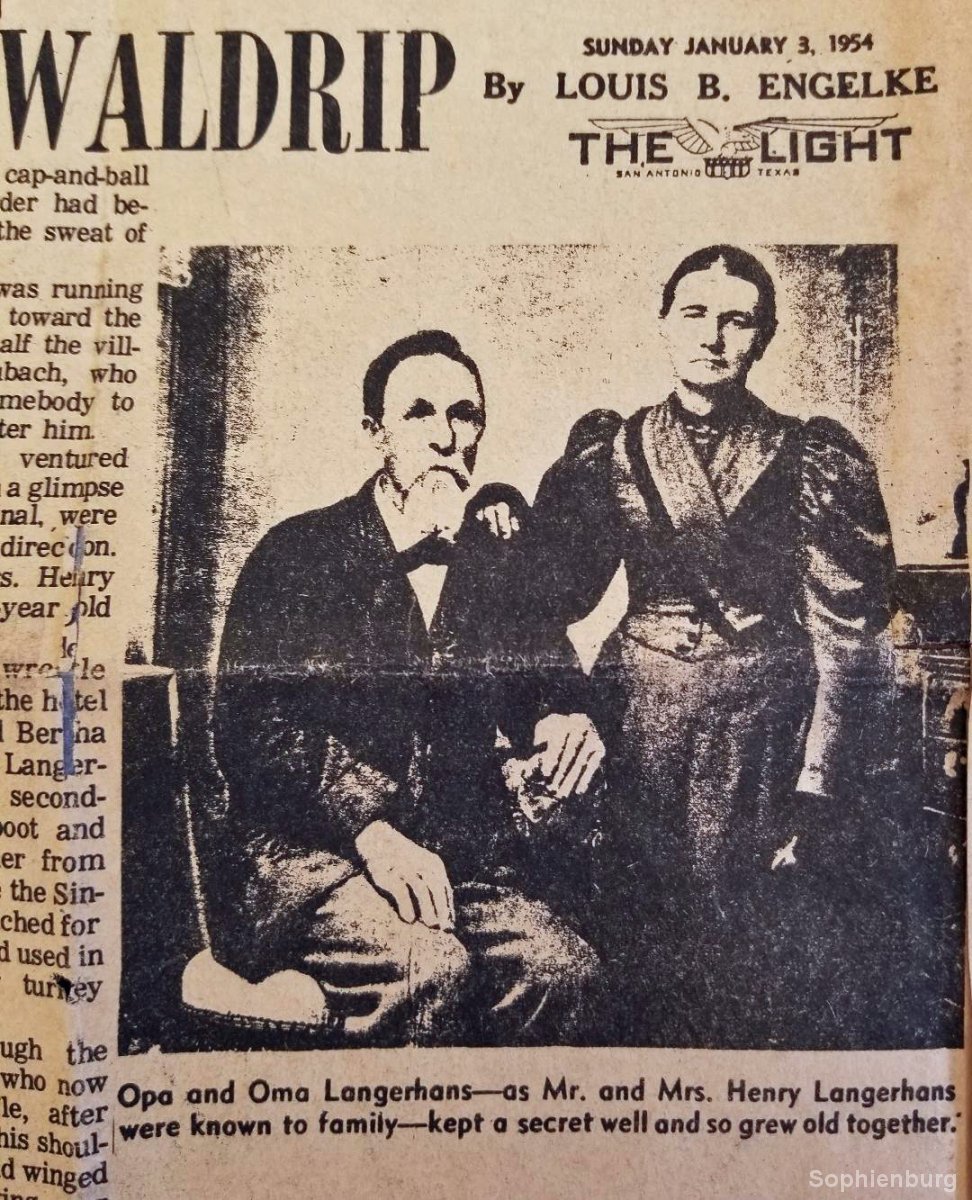 Your ticket for the: “He Got the Drop on Waldrip”

“He Got the Drop on Waldrip”