Sophienburg Museum and Archives > Blog > Around the Sophienburg > Potholes, paving and praise the Lord!

Potholes, paving and praise the Lord!

January 6, 2019
Around the Sophienburg, Sophienblog

Driving down Magazine Street the other day, I may have muttered some choice words when I bounced into a pothole that, I promise, a whole pig could have fit into. By the time I got to the Sophienburg, I was thinking hard about the streets in NB. Were they ever worse than they are now?

Imagine a time when there were no motor vehicles, only wagons, carts and carriages ALL pulled along by horses, mules and oxen teams. There was a lot of _ _ _ _ on the roads.

To alleviate the amount of manure and urine and God only knows what else was laying on those dirt streets, they needed to be “sprinkled” with water daily. Sprinkling also improved health and living conditions by lessening the awful dust problem caused by street traffic. Shop owners on the main business streets were forever dusting and washing off produce, wares, floors and store counters.

A sprinkling wagon was a large and heavy vehicle designed to carry a tank that held up to 1000 gallons of water. A sprayer system was hung off the back that delivered water “more natural than a shower itself” according to the Fairchild sprinkler wagon patent in 1879.

The first sprinkler wagon in NB was built at the Comal Ironworks (near the old Comal Cottons mill) by Theodor Meckel in October 1893. Citizens paid Meckel a small fee to sprinkle the street in front of their home or business. The City also paid Meckel to sprinkle Main Plaza and the first block of W. San Antonio Street.

In 1905, the City paid Julius Buske a salary of $754.10 ($2.25 per hour) to haul gravel to fix potholes and to sprinkle the main streets. With continued growth came more dirt streets and dust — – more animal-powered vehicles and muck. A small poem was published in the Herald.

The sprinkler man in our town, he works with might and main,
To get the pavement sprinkled well before it starts to rain.

The local Womens Civic Improvement Club marched to the rescue by purchasing a new street sprinkler wagon for the city in 1914. The Mayor “expressed his high appreciation and thanks.” These women also championed the placement of public restrooms under the bandstand on Main Plaza. These women were good people.

By 1917, the city’s growth had made the dust/sanitation problem of gravel streets nearly impossible to maintain. Mr. Clemens suggested the new-fangled asphalting of Main Plaza and W. San Antonio to Academy Streets. The Uvalde Rock Asphalt Company was hired and completed the paving by February 1918, giving “the principle part of the city an up-to-date appearance.” FYI: A public notice was published warning everyone “not to burn trash or make fire for any purpose on the new asphalt street paving, as it will damage the paving.” Duh….

The City Council noted in 1918 that the City had paid $12,590.93 of the downtown paving bill and that 30 (named!) individuals had chipped in another $8,820.32 to extend the paving to the curbs on both sides of the streets. Incidently this public/private payment system remained in play up into the 1960s. The City would pay 1/3 of the cost of paving a street; that part was laid down the center. The other 2/3 of the cost was paid by the owners of the property on each side of the street; they were responsible for the pavement to the curb in front of their homes/businesses. Neighborhoods petitioned the City for paving, then had to get all the property owners to agree to the terms — not an easy thing to do.

A combination street sweeper and sprinkler was purchased in 1922, reflecting the dual nature of NB streets. Dust from unpaved side roads was being carried onto the asphalted main streets. F.F. Fischer ran the unit for 50 cents an hour.

In 1932, the demand from folks across the river in Comaltown was addressed by the renting of a motor-driven sprinkler truck. The truck accomplished in 5 hours what the horse-drawn sprinkler wagon could manage in 7. FYI: It required 22 hours to sprinkle all the unpaved streets in just downtown NB at this time.

Eventually, the city streets get paved and the dust problem is more or less solved, but that doesn’t really happen until the 1960s. That means I should remember gravel roads, but I don’t. By the time I was hitting the streets, it was pretty much all paved. All this has made me come to the conclusion that instead of muttering under my breath when I hit that pothole, I am going to joyfully praise the Lord that 1. I drive a car and 2. I drive on paved roads 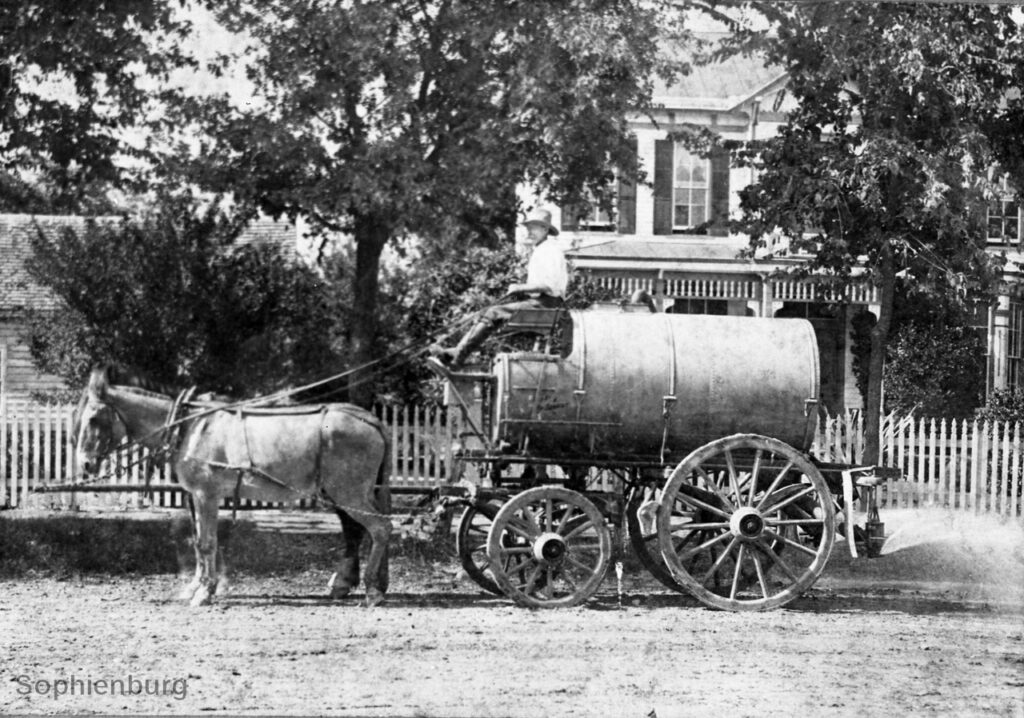 Mule-drawn sprinkler wagon 1905. Bare-foot children loved the coming of the wagon on their street. They would run behind the sprinkler to wet their feet and legs in the spray. (S588-051)

Your ticket for the: Potholes, paving and praise the Lord!

Potholes, paving and praise the Lord!