Sophienburg Museum and Archives > Blog > Around the Sophienburg > Pyrography (wood-burning)

December 8, 2019
Around the Sophienburg, Sophienblog 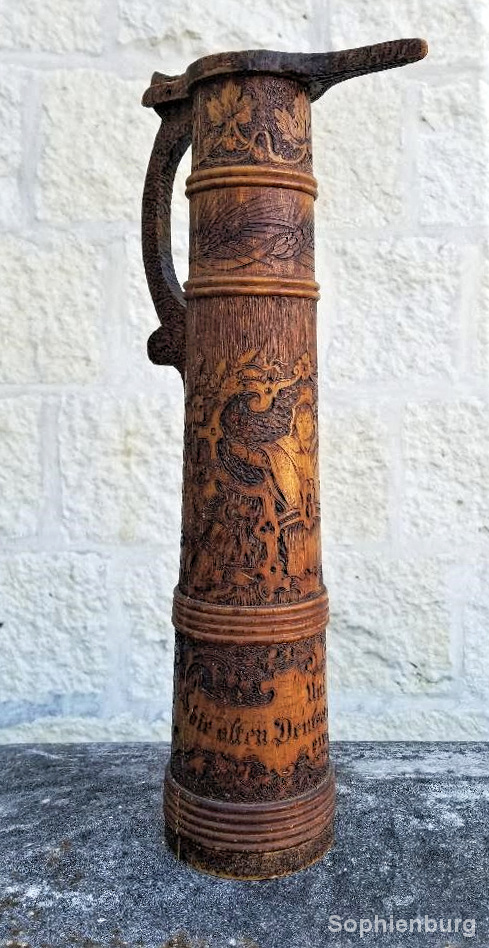 Take a look at the photo; it’s of a beaked-lid wooden pyrography stein. Yeah… that’s a mouthful…but the photo doesn’t come close to capturing the awesomeness of this newly-acquired artifact at the Sophienburg Museum. Standing a cool 22 inches tall, there isn’t an inch on this magnificent wooden stein that hasn’t felt the heat of a wood-burning tool.

Wood-burning, known as pyrography (pur=fire and graphos=writing) is an old art form. The earliest extant pyrography artifacts are from Peru and Roman Britain and date back well before the First Century AD. These objects were created using fire-heated metal rods, of various thickness and point size, which were applied to the wooden surfaces to produce burned designs. By the Middle Ages, small portable wood stoves were created with holes in the lids which allowed pointed little pokers with different shaped “nibs” to be placed in the hot coals; several pokers were necessary in order to always have a hot one to keep working with. This early method of wood-burning was called “pokerwork.”

A mechanical tool was invented around 1900 that made the creation of pyrography art easier. It was fueled with benzene. The needle part of the tool was made of platinum and screwed into a needle holder creating a graphics pen. This was connected by a rubber tube to a bottle of benzene. The tube continued on to a rubber ball which could be squeezed by hand or foot to force the benzene fumes from the bottle to the graphics pen. The fumes were ignited at the needle tip and this kept the needle heated.

The pyrography process became much more efficient and simple when the wood-burning pen became electrified. The artist now had a temperature-controlled tool to work on his wood-burning project. We basically use the same kind of tool today.

The craft of pyrography enjoyed a surge of popularity in the United States from the 1880s to the 1920s. Housewives and young adults were encouraged to keep their hands busy and make small craft projects to beautify their homes. Books and magazines published designs and patterns. Kits were available through mail-order catalogues like Sears, Roebuck & Co. and Montgomery-Ward.

Pyrography became so popular around the turn of the century, that they named the craze “Pyromania.” Factories were founded to supply the demands of the craft. The Flemish Art Company of Brooklyn, NY, was the first and foremost of these suppliers. The Flemish Art Company (FLEM-AR-CO) got its name based on the belief that wood-burning had Flemish origins. This company was so successful in nurturing the craze that the term “Flemish art” became synonymous with pyrography. They produced pyrography kits which included instructions, a wood-burning tool, wood pieces for the hobbyist to decorate, and paints to enhance the wood-burned items.

They also provided unfinished wood pieces with a design pre-stamped on them (in brown or purple ink) that could be burned over by the artists and sold other unfinished wood pieces with designs that had been pyro-engraved by means of a heated engraving plate. These pieces were bought and the crafter could just add stain and paint. This type of preparation was called “scorched” work. The appearance of scorched pyrography differed from hand-done pyrography — – the pyro-engraved design tended to be shallower and was repeated on both sides of the lidded pieces. FLEM-AR-CO was huge and employed hundreds of people, many of which were young women.

The spectacular beaked-lid pyrography stein came to the museum via California; it’s quite a story but here are the basics. The Schlador and Wiedenfeld families had made it to Texas by November 1845 and travelled inland to New Braunfels. By 1849, the families were united by the marriage of Friederich Heinrich Schlador and Franzisca Wiedenfeld. In 1852, this couple moved near Comfort. Sometime between 1862 and 1867, the Schladors moved to Bandera County and then to Kerrville. One son, Samuel, fell in love with the girl-next-door, Maria Trevino, and moved to Brackettville after their marriage in 1878. Samuel followed his father and moved his family of five to California in 1886. The Schlador descendants in California decided “the old wood stein” should complete a circle back to Texas. They suspect it might have been made in the 1880s. The beaked-lid wooden pyrography stein is the centerpiece of an exhibit on pyrography art which features other wood-burned artifacts from the Sophienburg’s collections, the Ludwig family and a few of my own. It includes items of leather that have wood-burned decoration on them. The exhibit will be up for several months so come see it at the Sophienburg Museum Mon-Sat, 10am-4pm.

I’m pretty sure that some of you have wood-burned items in your own family stuff. Maybe you know who created it (or used it) or maybe it was factory produced. I sincerely hope that each piece will take on new value and interest now that you know a bit more about their place in history.

Hey! Why don’t you include a pyrography set inside someone’s Christmas stocking and the art can live on!

Your ticket for the: Pyrography (wood-burning)