December 9, 2018
Around the Sophienburg, Sophienblog

I ended the last article talking about Oscar Friedrich, the brother of the old naturalist, Otto Friedrich. I continued looking into this family of naturalists, artists, and come to find out, big game hunters.

Oscar’s son, was named Frederic Louis, but he went by the name of Otto Jr. (Little Otto must have really liked his butterfly-chasing uncle!) Otto Jr. became very well-known for being a bear hunter and a crazy good shot under pressure. His escapades were immortalized by his father, Oscar, in pencil and oil art works and in newspaper stories.

During the last days in November, my son Otto was roaming around looking for turkey; he was about 1 ¼ miles from his place near the Rohde Farm when he caught sight of four bears — a male, female and two half-grown bears — on a cedar-crested hill on the other side of the road near a deep creek. After a quick decision and with full confidence in his Winchester, he carefully crept toward this spot and saw a young bear which seemed to have noticed him … with a single shot, the bear was dead. Quickly another cartridge was put into the gun. At the outcry of the shot young bear, the mother bear came forward and with another well-aimed shot, that bear lay dead. The second young bear was attacked by my son’s dog and climbed up a tree. My son killed this bear with another shot. The bear, just wounded, needed a shot to the head.

Four shots. Ten minutes time. Otto had killed three bears only ten miles north of the city on the Guadalupe. Before you get upset that he killed them, consider the times. It’s November 1880. People hunted for food, for skins, and to protect their families and animals.

Oscar Friedrich painted “Four Bears at Sundown” and hung it in the Guadalupe (Schmitz) Hotel. It showed his son, Otto, standing with his Winchester and the three dead bears. In 1866, he added a companion painting to the hotel exhibit, “Four Deer at Dawn”, which portrayed a scene of his son and four downed deer.

The Sophienburg Museum has a pencil and ink drawing on painted canvas by Oscar Friedrich. It too tells a story of Otto’s marksmanship. Oscar related the story to the press in detail.

On the evening of May 24, Otto Friedrich, Frank Schlather and Theodor Meckel, all on horseback, went hunting for raccoons and other small animals accompanied by seven hunting dogs. At about 10 pm, the dogs scented the tracks of a larger animal and soon their peculiar barking indicated that they had brought their prey to bay. As the hunters came to the creek bottom, they saw an immensely big bear in a cedar tree. Otto was the only one with a gun, a breechloader with small-shot shells. Their position was about 3 miles from the farm where Friedrich had his much-needed Winchester.
On foot, this already well-known bear hunter, took a stand about 12 steps from the bear and fired a salvo at the bear’s throat. The bruin was only angered by it and came down from the tree to fight his way through the pack of dogs and escape into the night. The horse-mounted men and the dogs rushed after the bear in a wild race plunging through dense brush, over steep hills, and through creek beds. Night had come and with the moon obscured by thick clouds, the creek bottoms were cloaked in darkness making the chase troublesome. Never-the-less, the hunters pressed on until the barking dogs had cornered the bear in a big black walnut tree.
As the hunters neared, the bear jumped down and fought with the dogs which forced him back up the tree. Once more the bear came down and this time got through the hounds to escape in the darkness. The dogs and the hunters were in noisy pursuit, over hills, through valleys, by cliffs, and down rough slopes. The race stopped with the bear cornered in a tall live oak tree along the limestone cliffs of the Guadalupe River. Only Meckel’s hunting dog and two others had endured the 3-hour chase.
Meckel left to get the Winchester and a hunting lantern from Friedrich’s nearby farm. Even with the lantern, the darkness prevailed at the treetop and the bear was hard to see, but Otto discerned the black mass of the bruin among the foliage. After the crack of an apparently well-aimed shot, the beast tumbled down from a height of more than 20 feet, breaking two tree limbs in its fall. The bullet had only disabled one of the front legs. In a moment the bruin was fleeing into the brush and darkness with men and dogs in pursuit. Frank Schlather’s shirt and pants were torn into shreds. Horses, dogs, men and the beast were exhausted but the exciting pursuit continued.
Again the dogs cornered the bear who turned and began to fight. Meckel’s best hunting hound was killed and Otto shot the bear just about 150 steps from the location of his earlier bear hunt. The bear stopped and turned toward Friedrich who was on his white horse. A second shot and the bear fell dead. The wild and dangerous night chase on horseback had lasted from 10pm to 3am. Two prize-winning hunting dogs were dead. The bear, fat with a fine shiny pelt, weighed 450 pounds. The bear meat was offered to New Braunfels residents as a delicacy.

The museum’s picture, named “The Dominating Bruin”, commemorates this 1883 tale with remarkable detail and skill. It depicts a huge bear, standing on his hind legs advancing on his attacker. Otto is in front of it, bravely raising his Winchester to dispatch the massive creature. The landscape is replete with rocks and trees, hills fading away in the distance, several hogs running off to one side and a lone bird in the sky. A news article in July 1886, praises the talent of Oscar Friedrich and how amazing it was that a man, untrained in art, could show superior ability in his hunting scenes.

My romantic theory? This family of brothers were immersed in the wonder and beauty of their Texas. Old Otto studied its variety in the insects and butterflies he so carefully collected. Oscar loved its color and detail and capturing the life and death drama of his son’s hunts. And Otto Jr.? He found joy in the abundance and provision of creation. 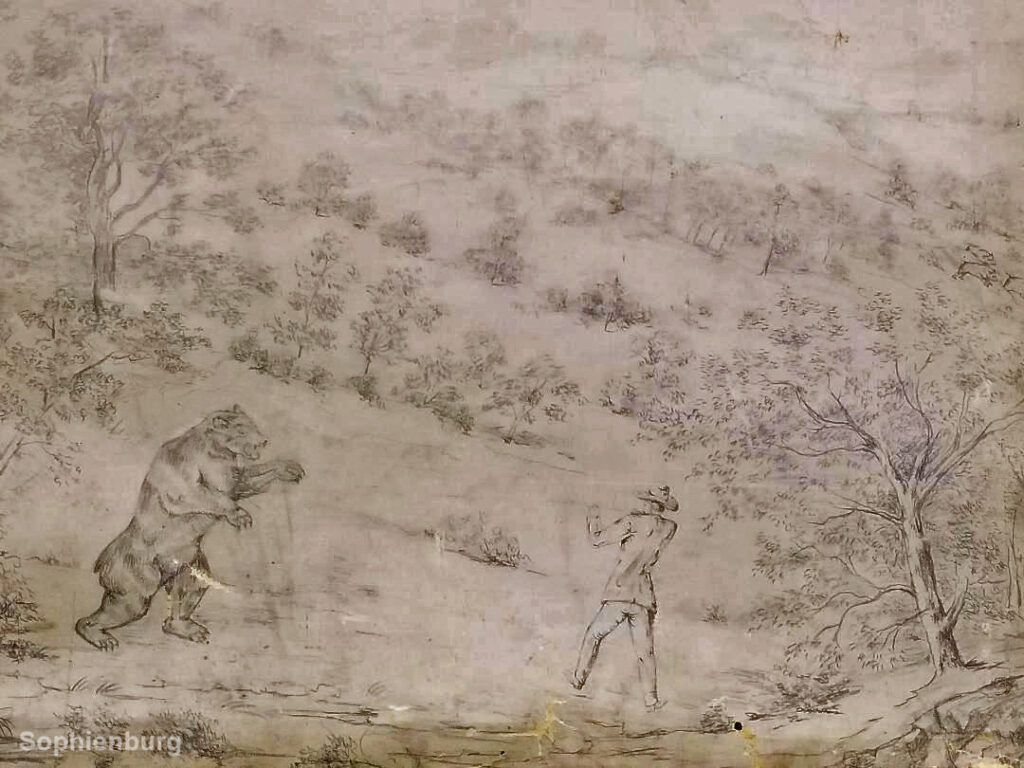 Your ticket for the: The Friedrich brothers (Part 2)