World War I Centennial and Weihnachtsmarkt

November 11, 2018
Around the Sophienburg, Sophienblog

At 11:00am on November 11, 1918, the fighting ended. Bells tolled around the world to mark the end of the Great War.  Over 4.7 million Americans stepped up to serve in uniform between April 6, 1917, and November 11, 1918. Two million of them were deployed overseas and 116,516 of them never made it home. Over 5,100 of these casualties were Texans. Today, on the eleventh hour of the eleventh day of the eleventh month, Bells of Peace will toll 21 times to commemorate the truce between the Allies of WWI and Germany, honoring those who died in service. Conceived and designed in collaboration with the nation’s veterans of service with the Honor Guard at the Tomb of the Unknown Soldier, the bell tolling provides a solemn reminder of the sacrifice and service of veterans of World War I, and all veterans.  Bells will be tolled in communities across the nation, in places of worship, schools, town halls, public carillons, and cemeteries, to mark the centennial of the Armistice that brought an end to hostilities, in what Americans fervently hoped had been “The War to End All Wars.”   This nationwide program is designed to honor those American men and women who served one hundred years ago, during WWI.

The Sophienburg Museum & Archives, in collaboration with the Texas WWI Centennial Commission presented “War Stories: New Braunfels in World War I” an exhibit depicting how New Braunfels’ uniquely German character compelled its citizens to respond with fervor once America was at war with Germany. On view in the exhibit are artifacts from the Sophienburg’s rich collections  — posters, photographs, uniforms and other historical objects to showcase events, individuals and ideology during 1914 – 1919, as well as touch on the lasting impact of The Great War. Although today marks the end of the Centennial Commemoration, the War Stories: New Braunfels in WWI exhibit will continue until January 1.

This column, Around the Sophienburg, is so named because we try to share the little details of history offering a glimpse of people’s lives in early New Braunfels. Not just about the Prince or the first founders, but of the real everyday people who fished or taught children or joined the military or ran a business… well, you get the picture. We follow the threads and solve the mysteries that beg to be solved – lying in wait on the shelves of the collection. It is not often I use this space to toot our own horn, but just for today, that changes. For the benefit of all those new to New Braunfels and those who have “lived here all their lives but never knew the Sophienburg Museum was here”, this column is for you.

On October 8, 2018, the Sophienburg Museum & Archives celebrated 85 years of preserving the history of our founders and all that has come after. In 1928, a group of civic minded citizens began the community fundraising drive to build a history museum. They were able to obtain the hilltop portion of the property originally owned by the Adelsverein. They built a rock museum in the image of a fortress on the very site where Prince Carl had built the first log government building naming it Sophienburg (Fort Sophie) in honor of his bride back in Germany. The community grew and prospered due to the determination of the settlers. That determination is deeply embedded in who we are as a community. Imagine where Boston would be if they hadn’t embraced the tea party in the hArtwork by arbor or Boston son Paul Revere? That’s why we protect our history so fiercely.

Everyone should know these basic tenets about New Braunfels:

But there is so much more…um, I digress.

The Sophienburg Museum & Archives, a non-profit benefitting from memberships, donatons, grants and fundraisers. Following our Mission, our fundraisers focus on preserving and sharing the traditions of our heritage: Sophie’s Shop booth at Wurstfest and Weihnachtsmarkt. Just like Wurstfest, Sophie’s Shop is synonymous with German tradition, selling German ornaments and little pieces of German culture to tie people to the heritage and ancestry of our fair city. Today marks the last day of the best “Ten Day Salute to Sausage” ever, but tomorrow we pack up our Prince Carl and move our Christmas wares over to New Braunfels Convention & Civic Center , where in three days time the huge space is converted by a hundred volunteers into a magical market place — Weihnachtsmarkt! Pronounced Vy-noks-markt, this New Braunfels tradition offers the charm of open-air Christmas markets of Germany, with a Texas twist. Enjoy Gemütlichkeit and fun at this three-day market supporting history education and preservation through the Sophienburg Museum and Archives. Shop over sixty merchants and artisans with unique German collectibles and ornaments, holiday decorations, apparel, jewelry & gifts. Spend time with friends – make it a date. Parking is free. New Braunfels Civic Center. Market hours: 10 -5 Friday, 10-6 Saturday & 11-5 Sunday. For more information call the museum at (830) 629-1572 or check our website at www.sophienburg.com

This is the 30th Weihnachtsmarkt supporting the museums operations, preservation of historic artifacts and documents and educational programming. It’s a great shopping experience to benefit the preservation of our wonderful city’s 173 years of history.

Oh – and continuing the German Christmas traditions in December, St. Nick stops by the museum on December 5th to make sure the children are on their best behavior. Bring your children and grandchildren to learn the Legend of St. Nickolaus. 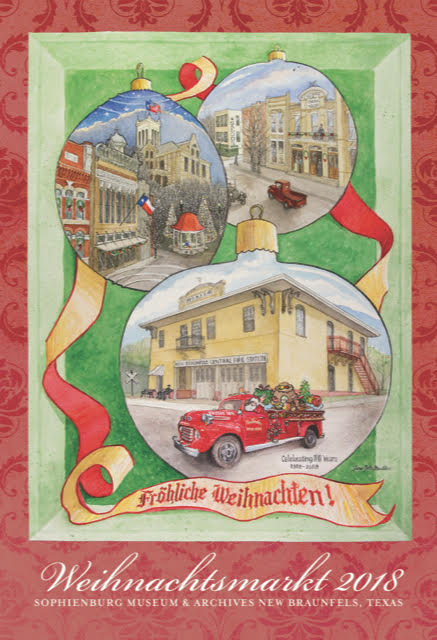 Your ticket for the: World War I Centennial and Weihnachtsmarkt

World War I Centennial and Weihnachtsmarkt