March 4, 2018
Around the Sophienburg, Sophienblog

According to stories of the Old West, suspected criminals were shot or hung. No jail was necessary. Then as people became more civilized, there arose a doubt as to whether the person accused was actually guilty. Could we possibly say that “those were the good old days?” I think not. Should we have a trial before the punishment takes place? Holding a suspect in jail was certainly a better solution. A trial determining guilt or innocence would follow, but what to do with the so-called criminal until the trial?

From this need, the idea of a jail was born and in New Braunfels, this jail idea was necessary early on. For that matter, the first suspected criminal, a woman, was arrested and kept in the home of Sheriff Henry Gerwin. There were no buildings when New Braunfels was settled but eventually log huts were constructed. Gerwin’s prisoner’s infraction was not noted in the Comal County Commissioners Court minutes but the Comal County Commissioners agreed to pay Gerwin for keeping his prisoner for 45 days in his home. Must have been mighty cozy. The county had to rely on others who had empty rooms or empty structures sufficient to serve as a jail. New Braunfels Mayor Heuckel, in 1848, helped out by renting the commissioners a room in his home for ten months for $25 to serve as a jail.

In 1848, the County Commissioners asked the newly elected sheriff, Adam Maurer, to look for a place to be used as a jail. It would be subject to their approval. Now, this is interesting: About the same tine in 1848, the county asked the city if they would grant land to build both a courthouse and a jail. When the city offered no land, the commissioners advised the county clerk to tell the city that they intended to build a courthouse and a jail on the Main Plaza even though the property was owned by the city.

The city was asked to respond to the request and after not hearing from them, Commissioner Dr. Koester was asked to obtain a resolution from the city. This eventually happened, but not resulting in what the county expected. The city then offered two lots near the Comal Springs and suggested that if necessary, the county could sell the property in order to purchase property somewhere else, but NOT on Main Plaza.

Buying a lot and building a courthouse and jail was an expensive proposition and the county had only $400 and taxes were still forthcoming.

In July 1849, Theodore Sterzing offered his lot to the county for $600 which included two log buildings. This lot was town lot #85 fronting on Seguin Avenue. The lot is in the location of the parking lot for the Elk’s Lodge. The county records show that the offer was accepted, and the county moved in the larger of the two log buildings. The future plan was to build a log jail on the site 12 feet square using logs 9 inches thick. This building was eventually built and can claim its fame as the first jail in Comal County.

Eventually, the log jail became unsuitable and in 1854, a new jail was built at what is now 509 W. Mill Street. This jail served the county for 24 years.

Do you know the story of the Moesgen murder? Moesgen was a first founder of New Braunfels and he was murdered by his wife, daughter and son-in-law. If you own the book “Around the Sophienburg,” you can find the story on pages 236 and 237. The book is a “must read” to learn about the history of New Braunfels and Comal County. The family killed Moesgen in 1855. The story tells us that the three family members were hauled off to the sheriff’s home. The year shows that they were placed in the Mill Street jail. The court found the three guilty and imprisoned. One died in prison and two were paroled.

The Mill Street jail began to deteriorate, and plans were being made for a new jail to be built behind the 1860 courthouse (where the Chase Bank is located). The new jail was finished in 1879. The plans included iron cages to hold 20 or 30 prisoners. The two-story building was built of limestone rock with an iron roof. Fredrick Ernst Ruffini of Austin was chosen as the architect. The cost was $10,000 with a bid of $1000 for iron work. This building served as the jail from 1879 to 1931.

In 1898, the present courthouse was constructed and in 1931, the jail was added to the north side of the structure. The old jail that was in the Chase Bank parking lot, was torn down in 1958.

What happened to the old stones from the jail? It’s an interesting story. When Sts. Peter and Paul Church had an enlargement project in 1962, some of the stones were used from the old jail in their project. Both sides of the exterior of the church have some of the stones. When researcher John Coers was taking photos of the stones, he found carved initials. He thinks these were done by prisoners.

Another use of the stones from the old jail can be found at the outdoor patio and steps leading to the basement of the Prince Solms Inn on San Antonio Street. There are three notable stones at the top of the steps that have the words COMAL COUNTY PRIS.

The New Braunfels Conservation Society is in the possession of the cornerstone of the old jail with the architect, F.E. Ruffini inscribed on it and they also have a metal device that was thought to be used to pass food through to prisoners. 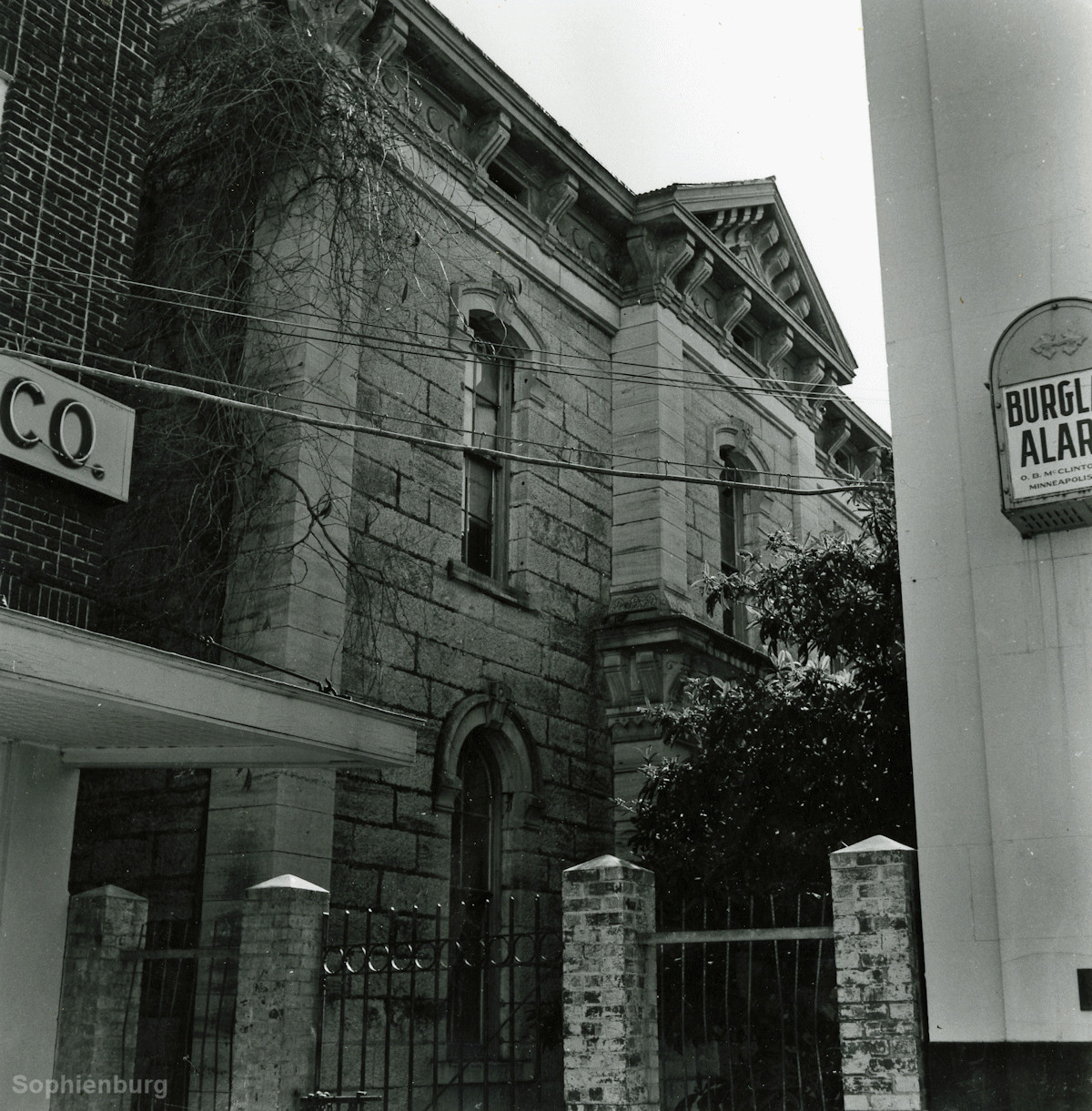 Your ticket for the: Early jails in New Braunfels