June 11, 2017
Around the Sophienburg, Sophienblog

This article originally appeared in the Herald- Zeitung on January 23, 2007.

Marie Jarisch and Gaston Parsons have an obvious pride when they talk about their grandfather and the Seekatz Opera House. The current Seekatz Opera House owned by Ron Snider is on the exact site of the original building, which burned down in 1941. Brothers Louis and Otto Seekatz, Louis being the grandfather of Jarisch and Parsons, saw a need in the late 1800’s for a large building downtown to accommodate traveling shows and local entertainment. The brothers were butchers by trade and decided to build their building on the Seekatz homestead next to the butcher shop downtown. They chose local builder Chris Herry and architect James Wahrenberger to come up with the plans. I have seen the architect’s specifications and they read like the instructions for building King Solomon’s Temple. Example: the brick was to be good hard well-burned selected Laredo brick. It’s hard to believe that a building so solidly built could burn like it did.

The two-story building had a wooden floor with removable seating for dancing. The large, beautifully appointed stage was the focal point of the main floor, complete with backdrops, velvet curtains, and dressing rooms.

On entering the front doors there was a bar on one side and barber shop on the other. This bar was quite successful until the advent of Prohibition, at which time it converted to the Staats brother’s Candy Kitchen.

On the second floor were balconies on both sides for viewing the stage and happenings on the floor below. Upstairs were also private clubrooms. The basement housed a kitchen and tables and chairs.

Living up to expectations, the Seekatz Opera House not only became the scene of traveling vaudeville shows but just about every large event in town. There were New Years Eve dances, Firemen’s Balls, Kindermaskenball, Fourth of July celebrations, orchestra concerts, high school graduations and many dances.

Marie Jarisch remembers seeing the famous fan dancer Sally Rand on the stage. Dancing with only two large ostrich feathers to cover her, Rand had introduced this dance at the 1933 Chicago World’s Fair. Supposedly she was good at creating the illusion of nudity while dancing “tastefully” to the music of Chopin. Hmmmm.

Gradually vaudeville and traveling shows became less popular as silent films made their debut. Jack Kaufmann, Sr. leased space to show movies as the stage productions decreased, and his son, Jack, Jr., who lived upstairs at the Opera House along with his parents and sister, Mary Virginia Brinkley, remembers some of those early stage shows. There was the freckle-faced singer and later movie star Arthur Godfrey and he recalls animal shows with live animals, especially monkeys.

Kaufmann said a Mr. Toepperwein did trick shots with a 22 rifle. He said Toepperwein stood in the balcony and fired at a screen over the heads of the audience. Can you imagine that today?

Then there was the 7 day bicycle rider whose bicycle was on a stand outside the theater. He actually rode 7 days and 7 nights.

Eventually movies overcame all the other entertainment. Kaufmann remembers the first silent movie,“The Great Train Robbery”, and the first “talkie” was Al Jolson’s “The Jazz Singer”. It was half silent and half talking. He said that his dad tried to keep up the show tradition by bringing in live animals when he showed the Frank Buck “Bring ‘Em Back Alive” movies. Otto Locke would bring in the animals and once he brought a giant boa constrictor.

In the 30’s G.A. Cole bought the movie business and the Seekatz Opera House became exclusively the Cole Theater. That’s what it was on January 21, 1941 when it succumbed to fire. “Stella Dallas” was showing at the Cole and outside the billboard advertised the upcoming “Misbehaving Husbands.” They never had a chance to misbehave at the Cole.

In the 1960s Gaston Parsons located the 300 plus pound marble cornerstone, which he still has. You can now view a display concerning the Opera House at the Sophienburg, including one of the 45 star flags flown in front of the building, plus the contents of the prematurely opened (due to the fire) time capsule. Shimmy on up the hill and see it. 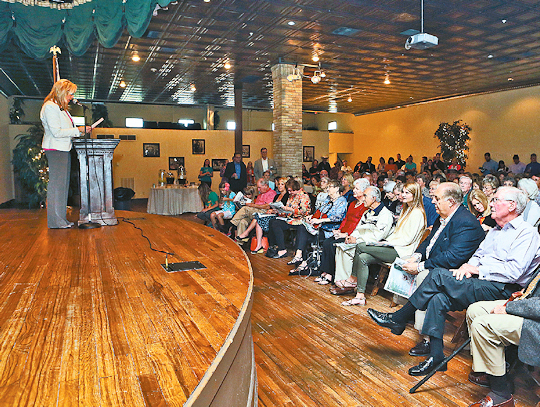