May 28, 2017
Around the Sophienburg, Sophienblog

Andrew White, a New Braunfels High School senior, is the recipient of the Myra Lee Adams Goff Sophienburg History Scholarship. In order to be awarded the $1,000 scholarship, high school seniors from all over Comal County are invited to write an essay about an historical person or event in Comal County. Andrew wrote the history of Schlitterbahn. It follows at the end of this column. Part of his essay is about his life expectations. Andrew will enter the University of Texas at Austin next fall to study journalism. I think you will see that this young man has something important to say:

I come from a long line of proud, courageous and honorable men and women. I think back only two generations to my great-grandfather, who flew every bomber under the sun during the dark days of WWII. He served our country’s Air Force for over 30 years during some of the most dangerous and harrowing times our great nation has ever faced. Step forward a generation and you find my two grandfathers. One was a pastor who once smuggled supplies to build a church across the Mexican border, while the other stood bravely alongside death himself on the Korean DMZ. And finally, my parents. My father was a winner of the Red Cross Hero of the Year Award, a Captain for Austin EMS, and a dedicated public servant for over two decades now. My mother is a Forensic Interviewer for sexually abused children, who saves the lives of hundreds of children each year, despite seeing humanity’s worst side day after day for nearly a decade straight. Each and every one of these people have partaken in a fight bigger than themselves, using their skills and talents to impact a countless number of lives. So, naturally, I’ve lived my entire life hoping to have but half of an impact as those who raised me did. However, I am not a soldier. I am decidedly not equipped to interview abused children like my mother, nor am I seemingly unaffected by even the goriest scenes like my father. Instead, my passion and talents stem from a different source entirely: words.

From the moment I learned to talk, I have been obsessed with words. Talking, writing, singing, I loved all of it. I devoured books in mere hours, and spent more time during recess with my nose in-between the pages of a novel than I would like to admit. But as I grew older, I was drawn specially to writing. There was something archaic and anciently beautiful about the act of putting a pen to paper and making even our wildest fantasies real and tangible. And after all, who is more impactful than the writer? From Shakespeare to Locke, Thomas Jefferson to Hemingway, writers are unique because they can impact millions of people from millions of places, all at the exact same time, by simply using their words. And that, I think, is my goal in life. To earn my degree, be it in Journalism or Creative Writing, and then use it to write. To put my thoughts into words, and allow others to put my words into action. To talk about social issues, and give a voice to those that need to be heard. To spread my values and ideas and beliefs, and impact the people who read them, just like my father and Shakespeare, my mother and Hemingway. To impact people, and to make a difference.

Sometimes, I think of myself as a paradox. Because, at this moment, I am the manifest of everyone that came before me. Everything the generations prior to me worked and fought for are represented in me and my freedoms. It’s my duty and my future to carry out the legacy of courage and honor and change that they implemented in me. And yet, though I am the manifest of the past, I am but a stepping stone for the future, and those who will come after me. I hope that one day my little brother, and maybe even my own kids one day, will look up to me and say that I was an agent of change. That I was someone who made a difference through his words and his action, and impacted the people he cared about most. In the end, how much money we make or what accomplishments we earned are irrelevant. What matters is the legacy we leave behind, the impressions we leave on the people we held most dear. And that legacy, that impression I want to leave, drives me. It is my end goal; my white whale, and I will fight for it until my final days.

History of Schlitterbahn by Andrew White

Nearly 40 years ago, an event occurred that would shape the future of our great city, as well as shift the entire landscape of the Texas Hill Country. An innovative, daring and renowned destination opened its gates for the first time on August 2nd, 1979 when Bobby and Billye Henry opened a local resort and turned it into the greatest waterpark monopoly known to man: Schlitterbahn.

Our growing town has long predicated itself on one of the most driving factors of economy: Tourism. Year after year, thousands upon thousands of people from all over the world visit New Braunfels, Texas. Whether it be to see the massive waterpark, visit the historic Comal River, or just to get a taste of what German Culture is like, tourists are what make our little town the second fastest growing county in the entire country. And what bigger draw than Schlitterbahn itself? Widely known as the greatest waterpark in the world (as their advertisements demonstrably declare), the allure of a fresh cold dip into the water is a welcome reprieve from the crushing Texas heat. And while it is impossible to truly gauge, I would wager that an incredibly large percentage of people who have moved here did so in part because of the proximity to the park. In fact, my very own parents moved here from Lubbock because my father wanted to work as the head first aid officer at Schlitterbahn in 2002. And I know my family’s story is anything but unique in that regard.

In my opinion, aside from Prince Solms himself setting foot here so many years ago, the opening of Schlitterbahn is the most pivotal moment in New Braunfels history. Without all the exposure and visitors the waterpark has brought, I doubt our town would have reached the lofty heights it has. The economy alone would be vastly different, as we would lose a primary source of income for the city. All the local restaurants and shops and attractions have, without a doubt, benefited from the tourism our city is known for, and much of that tourism can be solely attributed to the park. Overall, Schlitterbahn is responsible for over two million visitors across five states each year, and it all started in the humble town of New Braunfels.

But the effect Schlitterbahn has had on our town goes even deeper. As I mentioned earlier, we are now the second fastest growing county in the nation, a statistic which can be no doubt attributed in part to the waterpark. With the massive influx of residents, real estate has gone through the roof, and with each passing day, the city expands farther and farther, and every plot of land becomes more and more valuable. Some predictions say that within the next 20 years Austin, New Braunfels and San Antonio will merge along the I-35 corridor into a massive metropolis, a meteoric rise from a town that was a mere 50,000 strong just ten years ago. And it is all due in part to the attraction, tourism and exposure Schlitterbahn brings.

While this city of ours has an impressive and rich history, I would argue that no date is more important than August 2nd, 1979, when the gates of tourism were opened and the trajectory of New Braunfels was changed forever. The energy, revenue and exposure Schlitterbahn brings to the town makes it an invaluable and crucial part of our culture, and its impact cannot be overstated. 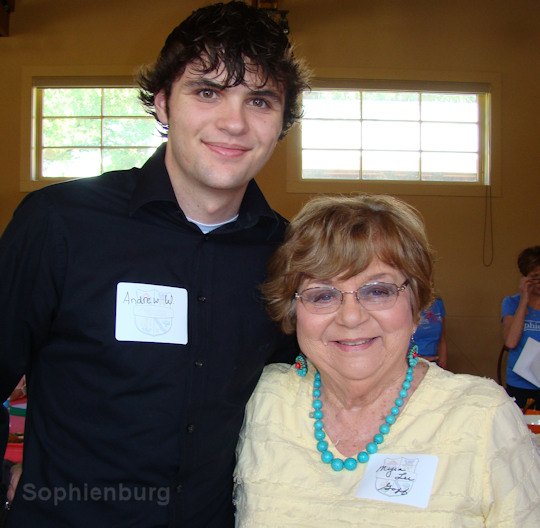 Your ticket for the: Sophienburg scholarship awarded