Sophienburg Museum and Archives > Blog > Around the Sophienburg > Recipes for life

May 10, 2020
Around the Sophienburg, Sophienblog 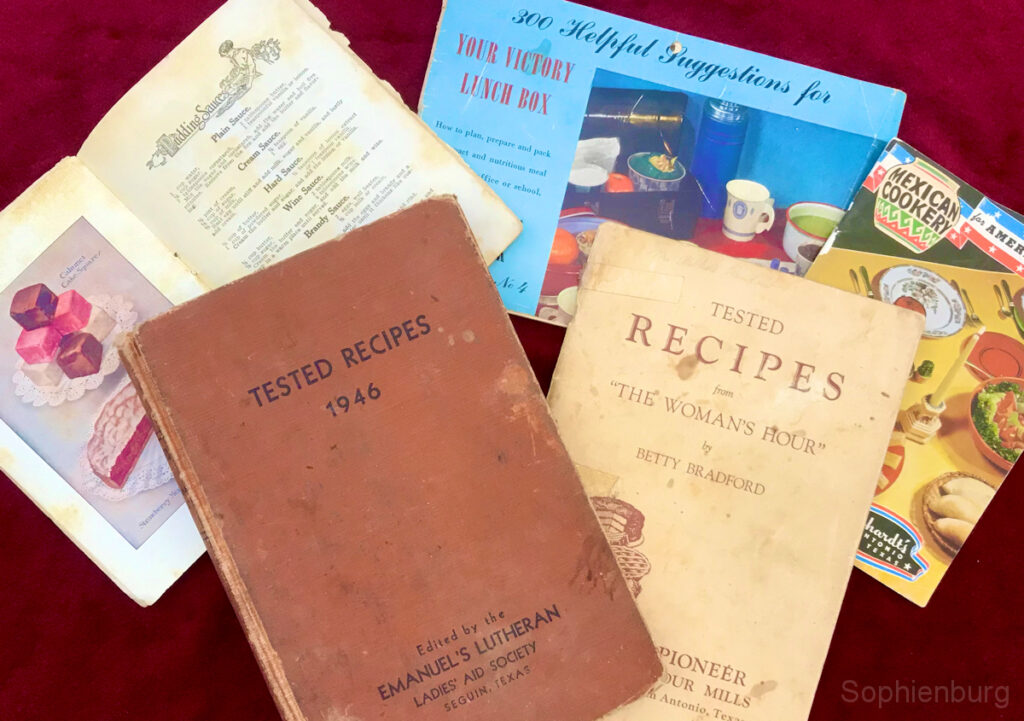 Now that circumstances are anything but normal, there is a pretty good chance that you, too, have been playing “What Can I Make With This?” The game is played while standing in front of an open pantry or refrigerator. Don’t get me wrong, I do love to cook, but when our Go-Go lifestyle became a Stay-Stay adventure, my Go-To recipes got boring.

I reached for my cookbooks, as I have quite a few. We tend to take cookbooks for granted. It is so much easier to just find a recipe on Facebook. A cookbook is basically a written collection of recipes for food preparation. The oldest recorded written recipes, i.e. cookbook, is a set of four clay tablets written in 1700 BC discovered in Mesopotamia. They contain a recipe for meat stew, using meat, vinegar, smoked wood, and herbs. The first English cookbook was written for King Richard II in the 14th century. Most cookbooks of that time were actually written for the lady of the house to read to her cooks, since the kitchen staff lacked the most rudimentary reading skills. The first known American cookbook was published in 1796. With time, more modern cookbooks served as kitchen references, as they also contained not only recipes, but also sections on running a household, childrearing, and personal memories or commentary. Over the years, I have collected quite a few vintage cookbooks. My favorites are the ones with handwritten recipes inside the front covers and in the margins.

My mom was a great “by the book” cook. She could follow any recipe and make it come out beautifully. I have a big, red and white checked Good Housekeeping book from her. It is well used. My grandmothers, however, tended to cook by rote. They mostly had individual recipes in a box. It was hard for me to accurately recreate the recipes for my favorite dishes prepared by my grandmothers due to subjective measurements like “pinch,” “dash,” “handful,” and “enough.” Both of my grandmothers lived and cooked through World War I, the Great Depression, and World War II. Most of their recipes were handed down from other women in their families. My Gran wrote her cornbread recipe on the box lid for my mother to learn. My mom did the same for me, which I in turn, did for my own daughters. It is not just the recipes for food that get handed down, it is also sharing recipes for life.

Before today’s glossy, Chef-inspired cookbooks with beautifully photographed food inviting us to prepare restaurant fare at home, there were smaller, more practical cookbooks that helped people simply survive. Women supported each other, their families, and their community through food. They came together during tough times in history to help shoulder the burden and support the nation. Newspapers, book publishers and manufacturers of kitchen appliances jumped on board during the Great Depression and both world wars, creating cookbooks/menus/recipes to survive food rationing and still be able to create healthy, hardy dishes with little to nothing in the cupboard. The New Braunfels Herald ran recipe columns and advertising calling on women to save wheat as their contribution to feed the soldiers and win the war.

During World War I, there were government mandated Wheatless, Meatless and Porkless days to allow much needed food supplies to be sent to the war front. Tuesdays were declared Meatless, forbidding any type of meat to be served, even in soups. Only breads, pastries and pies made with corn meal, rye flour, barley flour, or rice flour could be consumed on Wheatless Wednesdays. Porkless Day was Saturday, which meant no bacon or sausage served.

Recipes and tips, shared within families, became the backbone of cookbooks for the greater community. As early as the Civil War, women have shared their favorite recipes, selling cookbooks to raise funds for injured soldiers, churches, civic clubs, libraries and museums. Some books included poetry, daily devotional prayers or light humor. Suffragettes spread their message for the women’s vote. National Guard and American Legion Auxilliaries’cookbooks were interspersed with patriotic photos and quotes about bravery.

I will leave you with some recipes from World War I (1918) and World War II (1943), both periods of national strife and numerous rationed items. Remember that cookbooks are some of the greatest record books that we have. They are snapshots of history, giving us a glimpse of exactly what was going on during that time. What will they say about this very challenging period of time fifty to a hundred years from now?

Cook corn syrup, water, raisins, fat, salt and spices slowly 15 minutes. When cool, add flour, soda or bake in powder, thoroughly blended. Bake in slow oven 1 hour. The longer this cake is kept, the better the texture and flavor. This recipe is sufficient to fill one medium-sized bread pan.

Your ticket for the: Recipes for life