May 24, 2020
Around the Sophienburg, Sophienblog

The recipient for the Sophienburg’s Myra Lee Adams Goff history scholarship has been chosen.

Isabel chose to write about her great grandparents, Felipe and Elisa Delgado, who were responsible for the creation of the West End Dancehall and Baseball Park. Isabel shows how her great grandparents created the hall and how it became a gathering place with dances, weddings, music and other social events and a way for the community to enjoy the Hispanic culture. Baseball games on the property were some of the most popular activities that brought the community together. Felipe and Elisa Delgado were responsible for creating and sharing the West End and the rich Hispanic culture with all of New Braunfels. 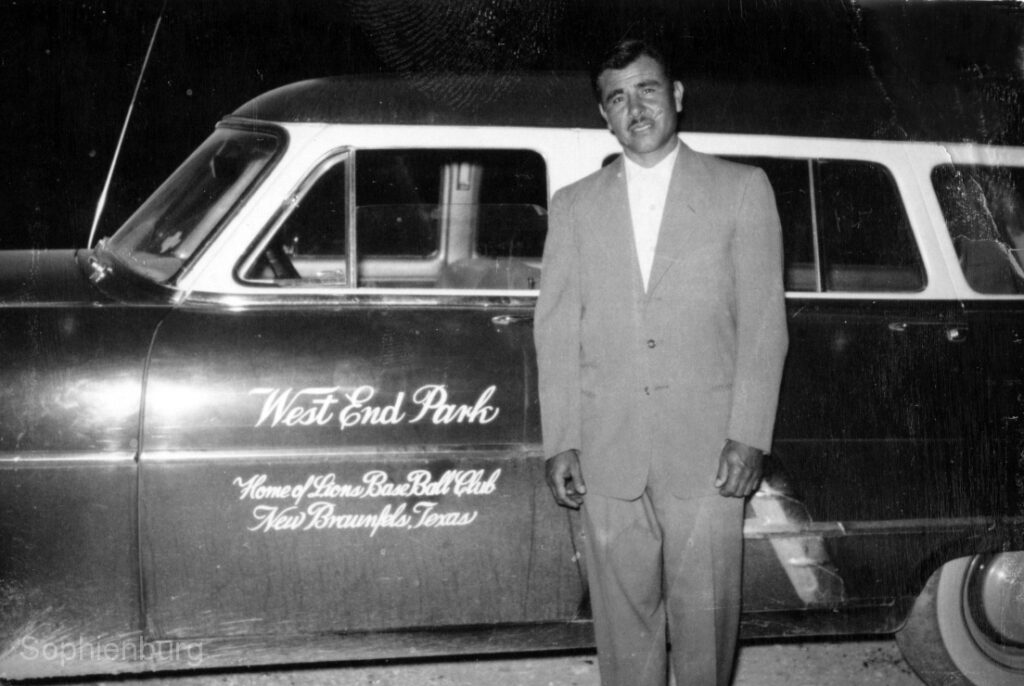 I am humbled and honored to speak of my great grandparents, Felipe and Elisa Delgado, as a historically significant duo in Comal County’s history for the purpose of bringing to light the important work they contributed in building our New Braunfels community. Their work as one unit gave a gift of great pride for the Hispanic culture and fellowship through the West End Dance Hall and Baseball Park (The West End) changed the life of New Braunfels forever. All that they created would not have existed had they not worked as one.

Although I only met my Abuelito Felipe (Great Grandfather Felipe) 2 short months after I was born, just before his passing, I feel like he would have taken great joy in seeing the person that he helped raise, indirectly through the loving family and great grandmother who carry his values and spirit on to the generations that follow. Abuelita Elisa is now 99, and as youthful in mind and feisty in spirit as the days of her youth. She speaks often of the importance of our New Braunfels heritage and upbringing, for it is unique in that we are grounded in the spirit of giving, supporting, empowering, and most importantly, traditions.

Felipe Delgado was born on August 23, 1920 in Marion, Texas, to immigrant sharecroppers who lived on a ranch, and worked their way to private land ownership in New Braunfels. Although he only attended formal schooling until 6th grade (to assist the family financially by working), he eventually attended and graduated from the Comal Vocational School. He began work, at age 17, for the Civilian Conservation Corps where he served two terms. He served our Country honorably as a radio operator during World War II in the Asiatic-Pacific front, and finally as a great contributor to the life and culture of our New Braunfels Mexican-American and a bridge to the general New Braunfels community. This last was only made possible by the deep-rooted belief my great grandmother Elisa Delgado had in Felipe’s dream.

Elisa was born on July 20, 1920 in Seguin, Texas, also to immigrant parents who had escaped the horrors of the Mexican Revolution. Abuelita’s family moved to Dittlinger or “La Calera” (the limestone kiln in New Braunfels). Her family life revolved around La Calera’s rich community where she attended school until 5th grade, and then jumped in to work to help her family financially. During her life prior to my great grandfather, she helped care for her siblings, taught herself to sew, and worked with her family as a migrant worker following the crops to Michigan. She worked as a seamstress at Cater Frock (the present day Recreation Center in Landa Park) where she had risen to a supervisory position at the time of her retirement. She continued to sew after her retirement from work as a supervisor and West End Partner, creating elaborate costumes for the Mexican Folkdance group her daughter and granddaughter founded, contributing greatly to the display and presentation of New Braunfels’ Mexican heritage.

As fate would have it, Felipe and Elisa met at a baseball game at Carl Schurz. They married in 1944 while he was on furlough, and began their life together as a valued couple of the community. In 1947, Felipe and Elisa purchased 4 acres of land for a dream my grandfather had of establishing a venue where the Hispanic people of New Braunfels could show their talent and share their love for baseball, while also gathering and celebrating their culture and company.

It was through this land that The West End was born. This exceptional place my great grandparents owned brought semi-professional baseball teams from around the area together to vie against each other and against teams from Mexico. This park was the pride of New Braunfels as it provided its many baseball players an opportunity to play on its home team, the Cardinals, and later the Lions. My mother remembers the final years of this hallowed ground as her mother and father used to play baseball and softball there on weekends while she and all the children ran underneath the bleachers playing their games of tag, Elisa stood her ground cooking the much sought after hamburgers on her now famous “comal,” (cast iron pan), and Felipe walked around visiting and assuring that all aspects of the park and dance hall were running smoothly. Hamburgers and Coke or 7Up — that is one of the collective memories that is repeated lovingly when our community gathers to reminisce.

The West End Dance Hall was another piece of The West End dream. This was where Hispanic families celebrated their life events: quinceñeras, birthdays, weddings, baby showers, and anniversaries. This was where memories were born. From the meager beginnings of a concrete slab, The West End Dance Hall was a celebration of life — an unprecedented entity that breathed life into the New Braunfels Hispanic community. This land served as a host to carnivals and community events, such as the famous Diez y Seis de Septiembre and crowning of the queen, which remain unforgotten and still bring smiles to those who remember.

In 2016, I participated and watched in awe as our small town honored and reveled in the many years of service that my great grandparents gave to the New Braunfels community. Through the countless, selfless hours of historical research my grandparents, Robert and Estella Farias embarked in, this New Braunfels gem which no longer exists beyond memories, was resurrected and validated as a place of high value in our New Braunfels community. The land where The West End Park existed received a State of Texas Historical marker and recognized Felipe and Elisa Delgado for creating this magical place where the nerves and tensions from the week diffused into the “Whack” of bats, thunderous applause and cheers, children laughing and playing, musically infused evenings, boxing matches, and enduring friendships that will never be forgotten. Felipe and Elisa Delgado were beloved visionaries at a time when our community needed it most.

Your ticket for the: Isabel Zuniga wins Sophienburg history scholarship