The story of the orphan photo album

June 9, 2019
Around the Sophienburg, Sophienblog 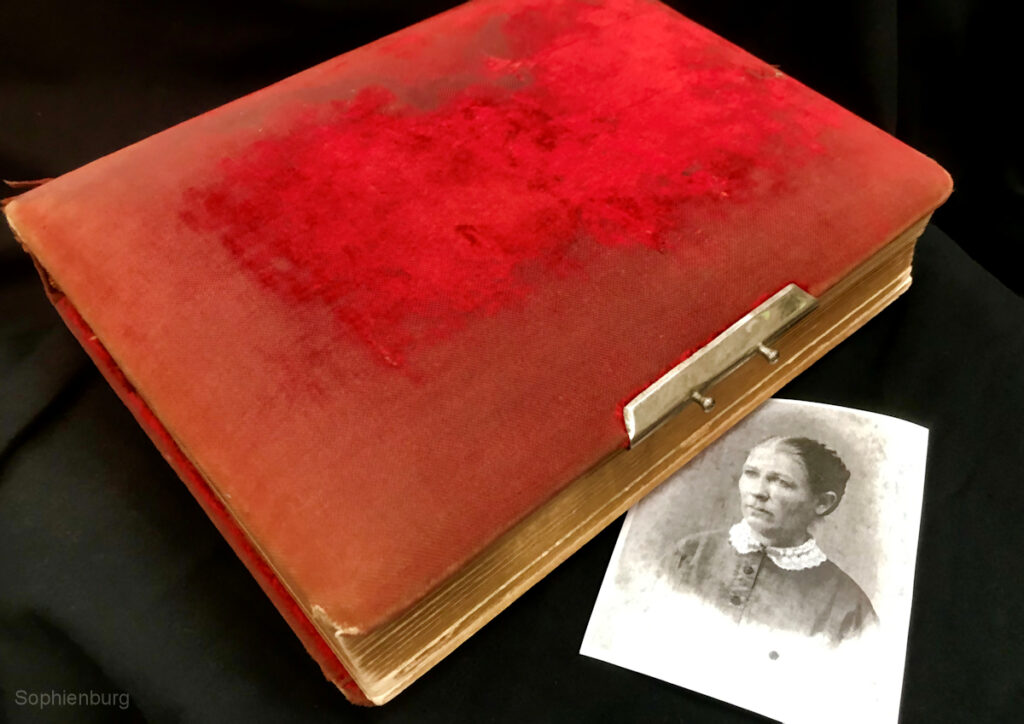 This past weekend I attended a reunion of my husband’s family. I don’t know everyone and I don’t know the family history, so I found myself gravitating to “the old ones.” They are the ones who know the names of the faces in photos from long ago, as well as the history of the families, the land, and the town. I love hearing the stories and the connections. What happens when the families move away or there is no one left to tell the stories? Here at the Sophienburg, we sometimes find that the stories connect themselves through mystery and happenstance.

On March 20, 2018, I took a call from a man explaining that he had an “orphan” photo album that he was trying to connect to its descendants. The man gave his name as Vlad and that he was calling from Colorado. He asked if I knew the names Wiegreffe or Ervendberg. I told him that yes, we were very familiar with the Wiegreffe and Ervendberg names. He then sent me a series of emails with photographs of a photo album dating back to 1887. Vlad, an environmental engineer, described how he found the large velvet-covered photo album in a United Way thrift store where he volunteered. The fact that it was a beautiful history of someone’s family and yet “orphaned” in a thrift store was distressing to him. Based on the hand calligraphy inscription, “St. Louis, Missouri – July 5th, 1887, Presented to Ida Heine by Will. Leutkemeyer”, he set about to reconnect it to its family by first contacting the St. Louis Genealogical Society. Vlad and members of the St. Louis Genealogical Society forged a long distance partnership. They very painstakingly poured over the few names inscribed on the backs of the photos and were able to generate a family tree connecting most of the people in the album.

Vlad had very specific criteria for the descendants who would take possession of the album. He wanted the person to have ties to someone in the album, preferably to Wilhelmina Heine Luetkemeyer or Ida Heine Wiegreffe. He wanted the album and the story surrounding it to be preserved as a whole, with no selling or trading of photos. He felt the recipient should really want the album and want it to be passed along to their children in their will. Most importantly, if the album were to become orphaned again, it was to go to an organization that would find a new home for it, like a regional museum with German-American roots.

The Society published the information in their quarterly journal and worked to locate and contact descendants about the album. By the time Vlad and I spoke the first time, they thought they had possibly found a family member to take it. I wished him well, thinking that was the end of it. Then on June 20, I was notified by Comal County Historical Commission Chairman Karen Boyd that she would be bringing an Ervendberg descendant to the Sophienburg, Sybil Dodson and her two sons. The Dodson’s had come to give the large red velvet-covered family photo album of Ida Heine to the Sophienburg Museum and Archives. So, what is the connection with St. Louis and why did it come home to us?

Ida Heine Wiegreffe was a relative of Auguste Ervendberg Wiegreffe who was the daughter of L.C. Ervendberg. He had been hired by the Adelsverein as the first pastor to New Braunfels immigrants and was founder of the Waisenhaus (Orphanage). Ervendberg ran the orphanage with his wife, Louisa. They had three living daughters and two sons (beyond those children they lost as infants). Experiencing marital troubles, Louisa went north to Missouri with the three girls (Auguste, Bertha and Emma). Ervendberg was to follow with the two boys, but changed his mind and took the boys to Mexico along with an orphan girl, 17-year-old Franzeska.

Daughter Auguste returned to New Braunfels with her husband, Carl Wiegreffe, who became sheriff of Comal County from 1864 to 1866.

The Heine/Wiegreffe album was finally home. It had traveled through Texas, Missouri and Colorado before circling back. And, it had had the help of a complete stranger to recognize the album’s uniqueness and find its family.

As a side note, while visiting with Mrs. Dodson and her family, we learned that she had lived in San Angelo all her life. Conversation turned to vocation, and she talked about becoming a teacher after initially studying to become a nurse. I made the comment that my aunt from the Texas Panhandle had attended Shannon Nursing School in San Angelo. Mrs. Dodson asked her name. After I told her, she said, “She was my roommate”. My aunt had just recently passed.

Don’t orphan those photo albums or odd pieces of memorabilia in antique stores. Bring those treasures to the Sophienburg Museum & Archives and let us reconnect them to their stories!

Your ticket for the: The story of the orphan photo album

The story of the orphan photo album