“Say It With Flowers”

May 26, 2019
Around the Sophienburg, Sophienblog 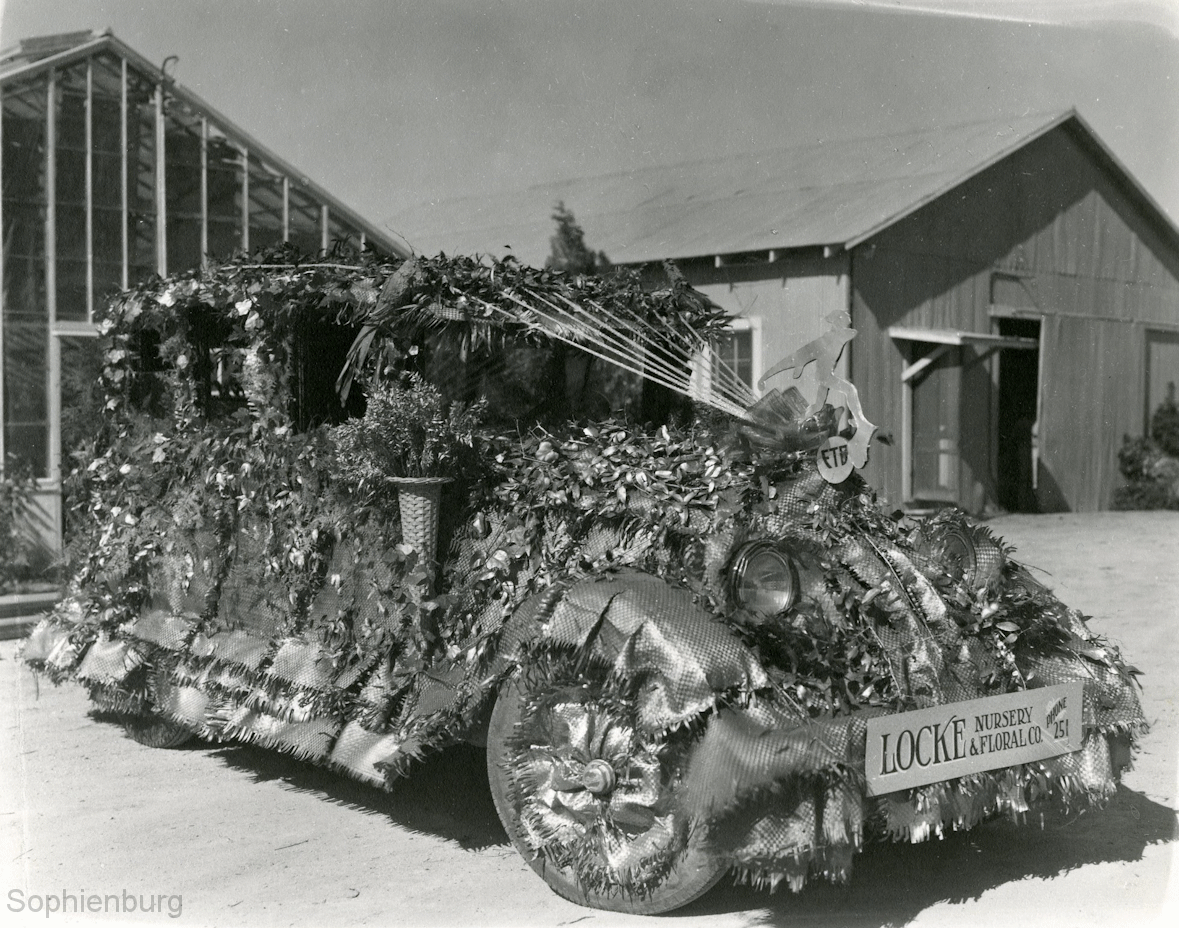 The circa 1930 photo of Locke’s Nursery & Floral Co. parade entry is fantastic, isn’t it? It was taken in front of one of the Locke greenhouses at 298 West Landa Street. The entire car has been draped with what looks like shiny (green?) colored fabric so that real flowers, vines, ivy, moss and ferns could be pinned or even sewn on. The hub caps are stuffed with fringed fabric. A large parrot is perched on each of the front corners of the roof. Decorative cords extend from the hood ornament all the way over the roof. Wait a minute — is that the FTD Mercury logo on the hood?

It was August 18, 1910. Thirteen florists met at the Society of American Florists convention in Rochester, New York, and formed the country’s first flowers-by-wire service. The new group, Florists’ Telegraph Delivery Association (FTD) would use the telegraph system to partner flower shops. The idea was the brainchild of John Valentine who had the idea of expanding the floral industry by offering customers a way to send fresh flowers anywhere in the United States.

Valentine was already using the telegraph system to get orders from out-of-state florists. He would cut, arrange and pack the flower order, then send it by train in an ice (refrigerated) car to its destination. He guaranteed his fresh flowers in an incredible three- to five-day delivery time! By networking the FTD members via telegraph though a central clearing house, florists around the country could fill orders for clients in just hours. Valentine even came up with the slogan: “Say It With Flowers.”

In 1912, FTD introduced their logo — Mercury Man — a symbol still in use today. This same symbol graced the hood of the Locke’s Nursery parade car.

I got to wondering just when New Braunfelsers were able to participate in this flower-by-wire technology. How fantastic it must have been to be able to “Say It With Flowers” to friends and relatives seldom seen. A dig into the newspapers revealed that two local floral companies were members of FTD as early as 1926: Locke’s Nursery & Floral Co. and Linnartz Floral Co. In a time when women often grew their own flowers for gifts and decor, these two businesses appear to be the first to venture into the floral industry.

Locke’s Nursery was begun by Johahn Joseph Locke in 1856, on Comal Creek (Town Creek development and Landa Street). In the 1870s, the business was taken over by his eldest son, Otto Martin Locke Sr., and was renamed Comal Springs Nursery. In 1928, his sons, Herman and Otto Jr., split the business: Otto and wife Etelka opened Locke’s Nursery on property between W. San Antonio Street and Highway 81 South; Herman and wife Thekla (along with their son Howard) formed Locke Nursery and Floral Co. at the old property in the area of Lockner (Locke Nursery), Floral and Howard (Howard Locke) streets. According to newspaper adverts, Thekla ran the floral company part of the business.

Linnartz Floral Co. was located at 876 and 882 W. San Antonio St. Curt Linnartz had built a grocery store on the property around 1920 (today that’s the William Edge Salon across from the Children’s Museum). He added a 14×15-foot building next to his store to accommodate his wife Paula’s flower shop a few years later. The shop was expanded to include a glassed-in greenhouse for growing flowers and plants year round in the mid-1920s. Linnartz Floral Co. got its own phone line in 1926. Upon retiring in the mid-1940s, Curt and Paula sold both the grocery store and the floral company building to Erno Weyel. Some of us remember Weyel’s Foodliner.

These two seem to have been the main town florists and the only ones regularly advertising in the newspaper and phone books throughout the 1920s and 1930s. Both Locke and Linnartz participated in several FTD-sponsored National Flower Shut-In Day events. This was a nationwide noncommercial project that utilized over 5,500 florists together with local garden clubs and other organizations to distribute bouquets and potted plants to hospital patients, disabled veterans, handicapped children and other shut-ins. Its objective was to make a large part of the shut-in population “happy with the gift of flowers.”

It didn’t take long for other townsfolk to get into the flower biz. A quick scan through old phone books, city directories and newspaper adverts revealed a growing number of florists and nurserymen springing-up all over town.

The floral industry in New Braunfels exploded in the 1950s due to an increase in population and in expendable finances.

Even in my lifetime, women who grew and cut flowers from their own yards began ordering flowers to give to friends or use for church and event decoration.

Today, there are about a dozen florists and half a dozen nurseries in NB, and that is without counting lumber companies and grocery stores. We can still “Say It With Flowers” and I, for one, am happy about that!

Your ticket for the: “Say It With Flowers”

“Say It With Flowers”