Sophienburg Museum and Archives > Blog > Around the Sophienburg > A cycling trip

February 17, 2019
Around the Sophienburg, Sophienblog

In 1975, Oscar Haas (known as the historian of New Braunfels) delivered a talk on things he remembered in his youth. Oscar was born in 1895, so by youth, he means somewhere between 1905-1915. One of the things he talked about was his cycling escapades.

Bicycle trips were often made with as many as a dozen boys participating. Usually leaving town by daybreak, and by noon finding a restaurant and after coursing around town, returning to New Braunfels to be home before night.

Personally, I made five trips to Fredericksburg during summer vacation weeks. Three times all by myself, one summer with George Baetge and another with Hermann Overhue. We cycled all the way up to Johnson City, from there to Stonewall, Luckenbach, to Fredericksburg, from there via Comfort, Boerne, and Anhalt back home.

Hmmm…. would I have let my young teenage boy jump on his “Zweirad” (two-wheeler) and head into the hill country? The world was so much more gentle back then. Haas described several of these cycling trips in the New Braunfels Herald in 1909, “Three Successful Vacation Trips on Racycles.”

… to silently glide out of town into the fresh morning air and “just go a sailing,” coasting down the long slopes of the country roads, up the hills and down again in a speed that the air howls past the ears and you grab on to the handle bars as to a bucking pony, in shooting the gullies leaving a whirl of dust behind; down, down you go missing a rock here and there by an inch, of course you see these, in time, ahead and steer accordingly, then off-hand, noiselessly on, on the smooth road, faster than all teams on the road, yet slow enough to glance right and left over the fields, pastures, hills and valleys…

In reading this I was first struck by the poetry of his great writing style. I can see and hear and feel the freedom he is describing. I then caught on the phrase, “faster than all teams on the road.” Finally, it hits me that this was written by a 14-year-old! I’m just going to put my pencil down and let Oscar continue.

In 1907 Herm. Overhue and I decided to take a week’s trip during our vacation. On a map we outlined a route … we measured the distances between these towns and thus scheduled each day’s riding … we made a list of things necessary for our comfort … for every pound weighs double when it is added to a bicycle, though the Racycle was just as easy with a heavy load, but sometimes it is necessary to carry the outfit through a stream or push up a little mountain. The first on our list was a tent … in two pieces of 8 oz duck 5 feet wide and 6 feet long. In this we had button holes made so we could button it together, then two tent poles each of three pieces made of broom handles so we could take them apart like a fishing rod, then ropes and spikes … a blanket for each also an extra pair of trousers, shirt, under wear, hosiery, towels, repair tools, bicycle lamp and carbide for same, frying pan, enameled coffee pot, plates, cups, knives and forks, ground coffee, salt, pepper and sugar in air tight tin cans, fishing tackle and various other smaller articles all of this we divided equally and rolled it up in half a tent, fastening the bundle in back of the bicycle seat with six-foot leather straps. In a leather bag we carried postals, paper, envelopes, stamps, pencils, memo books, comb, shoe polish, chain oil, chain links, valves, pump etc., a water canteen strapped over the shoulders, which we refilled often, for water is the main part on a trip.

I’m not for sure I would have made a list that was that inclusive. I’m totally sure my sons would not have. But then, these were young men from a different era. They took along towels, letter writing stuffs, shoe polish? I’m literally shaking my head.

… on Sunday evening, June 19th, 1907, at 7 o’clock we started and with lamp light rode to Smithson’s Valley. At 11 o’clock we pitched camp … slept till 6 o’clock Monday morning. Our intentions were to wake up earlier. At 7 o’clock after a hearty breakfast we were on the road again, singing, laughing and whistling. We mailed postals at Smithson’s Valley and then coasted down the long hills to the Guadalupe river, from there on it was mostly up-hill work. At 10:30 we arrived at Twin Sisters, mailed postals, bought provisions and pressed on for Blanco City where under a shady tree we had dinner and rested till 2 o’clock. We then started for Johnson City, roads were fine, but more and higher hills, going down, we always made up for lost time and we would soon have arrived at our destination for the day, but we could not pass a lady driving a shying horse. It was slow progress for an hour or so when finally she turned off. At 5 o’clock we were in Johnson City, cyclometer showing 56 miles from New Braunfels. After mailing postals, and looking around we bought eggs, butter, bread and bacon and started out to a spring of fresh water near the road about 2 miles from town, found a good camping place with plenty of wood for an all-night campfire and had supper before sundown. We sat around the fire and after a bath, we rolled up in our blankets. A refreshing breeze from the south, brushed the mosquitos off our faces, towards the north lightning was going.

Did you notice that they have popped “postals” in the mail three times in two days? You might think they are keeping the parents informed but, really, they stopped at each post office along their route to mark their progress. The two boys got an early start the next morning but met with trouble.

… all of a sudden we both took a tumble, we had struck real heavy sands and the wheels refused to turn. From there on “walk and push” was the game … The next P. O. we came to was Stone Wall …the sand getting deeper and heavier…

The two get Fredericksburg after 9 hours, travelling only 31 miles, and resolved never to take that route again.

They camped on the Pedernales using camphor-ice for sunburn and to keep mosquitoes away. The next morning, they started for Kerrville riding through both sand and a drizzling rain. Except for some rutting from wagon wheels in the mud, the ride was easy into Comfort. They camped near the Guadalupe River but were awakened by a storm. Undaunted, they got up at 3 am, were back on the road by 4, reaching Boerne at 9:30 am.

We stayed in town till 6 o’clock, rode down to Cibolo, crossed over and pitched camp, where frogs concerted all night. At 5 o’clock Friday morning we were on the road again going to Leon Springs. There we mailed postals and then rode to San Antonio. In the evening we rode out to Look Out where we camped for the last time on this trip and Saturday morning we came back home with a total of 235 miles. We broke no records … but made the trip like we had planned.

Fun times in the old days. But you know what? Growing up here as late as the ‘60s, the town still felt very “Mayberry-like”. We rode our bikes all around town, stopping for water straight out of the Comal Springs and sometimes a lime freeze at Ol’ Bossy. I wouldn’t trade those days for anything money can buy. 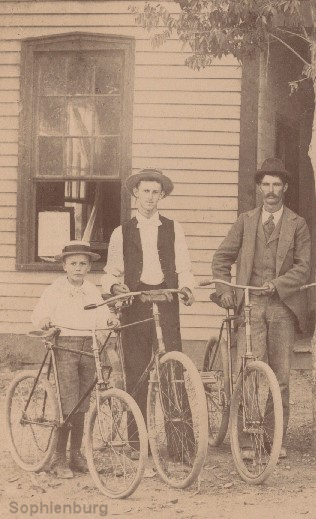 Your ticket for the: A cycling trip