Sophienburg Museum and Archives > Blog > Around the Sophienburg > All that glitters …

March 3, 2019
Around the Sophienburg, Sophienblog

It’s been reported that Texas has more buried treasure than any other state. There are 229 sites within our borders with an estimated total of $348 million in unclaimed treasure.

Generations of Texans and starry-eyed treasure hunters have sought for the hidden loot of famed robbers like Sam Bass, secret Spanish gold and silver mines, or even buried Confederate gold. I’ve stumbled across a couple of treasure finds that have occurred right here in our neighborhood. Here’s a good on from long ago.

Johahn Steiner had chosen his 320 acres at the upper spring of Coyote Creek on the Guadalupe River watershed near Cibolo. One day in October 18–, while hunting turkey, he stopped to look at some unusual rock formations and noticed the entrance to a cave about six feet above the creek bed. Scrambling up to take a look, Johahn (as all good Texans do) first poked inside with a big stick. Sure enough, he heard the loud rattling sound of a coiled up rattlesnake. He killed the rattler with one well-aimed shot, then carefully reached in to obtain the rattles for a trophy (again, how Texan!). His hand fell upon a smooth rounded object. Bringing it out into the daylight, Steiner was greeted with the hollow eyes and toothy grin of a skull.

Johahn carefully crawled into the cave and found the complete mummified remains of a Native American. An assortment of arrows lay near him — stout ones with heavy stone points good for buffalo hunting and lighter arrows for use in warfare. There were also two bows, a spear, a tomahawk and “a buffalo-hide shield fringed with scalps of coal-black straight hair.” Just a little away from the body, lay a buckskin-wrapped and tied bundle. It was heavy!

Taking the bundle to the cave’s entrance, he unwrapped the buckskin and found 20 small metal bars, about 2 pounds each, with a brownish tint of dust and grime. Johahn took his knife, carefully scraped the grime off a bar and revealed shiny yellow metal — GOLD!

Steiner’s head began to swim with thoughts about what to buy. A stove? Cattle? A rocker and bed? A sombrero with silver conchos, silver spurs and a fine saddle with silver trim?

Steiner repackaged the small bars into two bundles. The next morning, he rode into San Antonio to see a dealer located near the Alamo. He gently placed the bundles on the counter. The dealer unwrapped the bars and thought for several moments.

Without saying a word, the dealer placed a gold ring into a bowl and set it next to Steiner’s metal bars. He picked up a bottle of “saltpetresaure” (nitric acid) and dribbled the liquid over the ring and the bars. Nothing happened to the ring; Steiner’s bars began to dissolve.

“It’s bronze, a kind of brass,” explained the dealer. “The Spanish brought it in great quantities to trade with the Indians. The Indians, not knowing the difference in the metals, traded their Mexican gold rings and necklaces for the bigger bars of finely polished brass.”

Poor Mr. Steiner. But his was not the only story of gold treasure I found.

On August 24, 1964, Frank Luna was working with a water pipeline crew 10 miles south of New Braunfels. He spotted a corroded copper chest hidden under mesquite brush and called over his foreman, C. A. Ruppel. The men pulled the chest out of the bushes.

“We thought it might be a bomb,” Ruppel was reported to have said. However, the two men obviously thought it could be something much more valuable since they first agreed to split the contents 50-50 before they opened it. Cutting through the brass rod which made the lock, they forced open the chest revealing tidy stacks of gold coins under a metal grate.

The 84 golden coins on top were inscribed with “Hispan Arum Rex” and “Ludovicus 1 Dei Gra”. The Spanish coins of King Luis 1 of Spain covered stacks of 2, 436 — wait for it — brass washers with milled edges to give the illusion of stacked coins!

Luna and Ruppel contacted Sheriff Fellers who put the chest in his office at the courthouse. Folks came in the hundreds to gaze upon the mysterious treasure chest. Sheriff Fellers was reported saying that he wished, “someone would legally determine who owns it and get it out of my office!” The news went viral. Ruppel and Luna spent the afternoon smiling for photographers from TV stations and answering questions from reporters. Newspapers across the state and even one from Chicago, were asking the big question, “Are they real gold?”

Many believed that the coins were real, for hadn’t the chest been found on the El Camino Real? Surely each of the 84 coins was worth $2000 which made the whole chest worth over $1 million. By late afternoon, almost 300 “prospectors” were digging along the road near the site of the find.

Dr. William Burns came up from the Witte Museum. He examined the chest and found shiny screws. It weighed in at 122 pounds. “Too light,” he declared, “the chest an elaborate hoax.” Just in case, he tested the metal coins and found them to be brass. Still clinging to the hope of some reward, Luna and Ruppel placed the chest in Guaranty State Bank and hired themselves lawyers to keep track of each man’s claim. Two coins were reported to have been sent to the US Mint for further analysis.

A week later, the mystery of the “gold” treasure chest still made headlines. The hoax had been implemented with great skill: two dies had been engraved to make the coins and all those washers had milled edges to look like coins. Several thought that the chest must have been part of a Hollywood stunt or promotion. William Mahon, a professional gold digger from Garland, said it would have cost “$10,000 to pull off such a fantastic stunt.” He told Ruppel and Luna to get bids on the value of the chest and then call him, he was ready to buy the ‘truly worthless masterpiece of bamboozlery” for $500.

The mystery continues. After the first blush of excitement, the treasure chest hoax fades from the news. I would love to know the rest of this story, so if you can shed some light on this, please contact me at the Sophienburg Museum 830.629.1572 or post on the Sophienburg Facebook page (https://www.facebook.com/sophienburg.museum/). 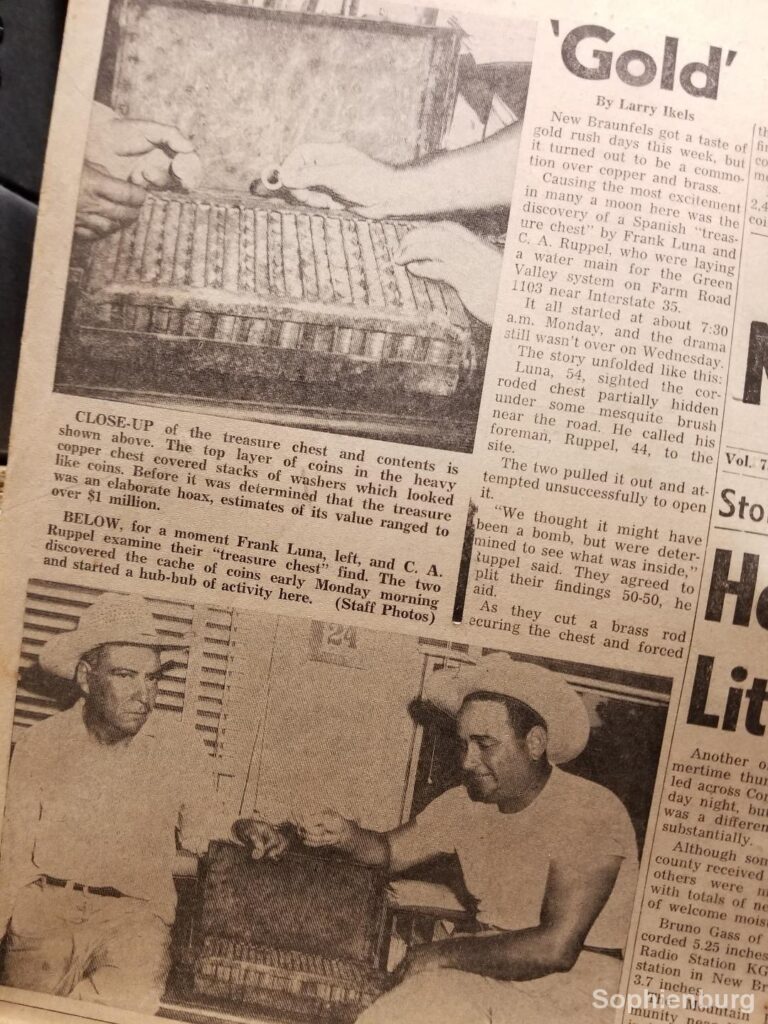 Your ticket for the: All that glitters …