June 7, 2020
Around the Sophienburg, Sophienblog 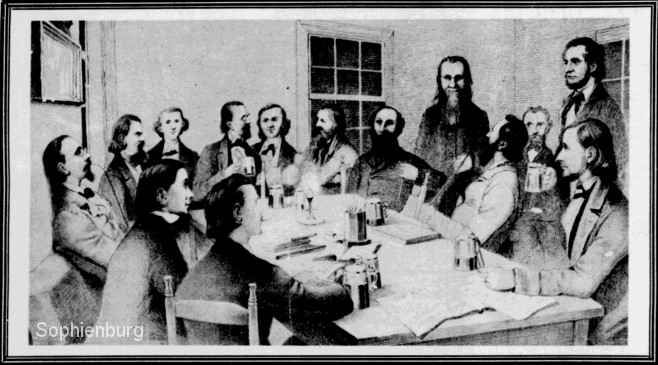 We are celebrating the 175th Anniversary of New Braunfels and its unique culture in which music played a large part. Music creates sounds that evoke different emotions. Sounds representing joy, sadness, patriotism, history and love and can be produced through many different instruments and particularly through the voice. “Music has charms to soothe the savage breast, to soften and bend the knotted oak.” (William Congreve, an English playwright and poet).

German immigrants brought their music with them when they made their way across the ocean to the shores of the Republic of Texas. One might say that the Germans brought their culture with them by singing. Vocal music can be easily produced and consequently shared by everyone.

The sounds of music are universal. Add words to the tunes and an even clearer picture of the culture emerges. Listen to the rousing Wurstfest song, “Ein Prosit, Ein Prosit, der Gemutlichkeit” and immediately words added to the tune convey a toast, (“Ein Prosit”) and (“Gemutlichkeit “) meaning good wishes or happiness. Now you know something about the culture. The poet Longfellow said “…the soul of man is revealed through his voice.”

A humorous story first told by Hermann Seele, and repeated many times, was this: The immigrants had strung a table across the flooding Guadalupe River and made a boat out of the bed of an oxen wagon to bring provisions over across the river. One day a barrel of white wine was being hauled across the river and ended up on a stone embankment. The barrel sprung a leak and the men used hats or pots and pans to catch and drink the wine until their jubilation rose above the rush of the waters, singing the song put to verse by Prince Carl and set to music by Captain Alexis Bauer. The song was “Durch des Weltmeers Wogen,” meaning “Through the Ocean Waves.” This story has a lot of “Reallys?” to it but what good story doesn’t?

From the beginning of New Braunfels, music, particularly singing, was a part of family and community life. Germans love to gather together with people of similar interests. It is understandable that singing groups organized early on. I remember that as a child, I would go with my mother to be with her family and they would sit around talking and suddenly burst into song. I thought everyone’s family did that.

In 1850, a singing society named Germania was organized. Under the direction of Gottfried Petmecky, the group sang at their first event July 4th, celebration on the banks of the Comal River. Two cannons were fired to open the celebration. The cannons were brought to New Braunfels in the early years by Prince Carl. July 4th continued to be celebrated in the same manner for the next two years.

In 1853, the July 4th celebration was held on Hermann Seele’s property. A parade through town was led by the Rifle Company and the Singing Society. They were singing what they called “jolly songs.” The Singing Society kept good records of this first event. They (the Society) stomped the clay ground and covered it with tarps topped with branches. Tables were placed inside, and the celebration lasted until dawn the next day. Quite a celebration in true German fashion. Ein Prosit!

It was on this same property that the Society (Saengerbund) built a dance hall called the Saengerhalle. They decided that they would host a festival. Invitations were sent out to nearby groups. Seventy-three singers risked their lives crossing the flooded Guadalupe River to attend. After the event, an informal dance was held.

By 1876, many other singing societies had formed. During World War I and II, German singing society memberships declined due to the unpopularity of German singing. Texas Germans endured anti-German sentiments. They were forbidden to speak German and fewer were willing to openly celebrate their heritage. After WWII, several societies experienced a rebirth. Eventually larger singing leagues were formed and organized. These leagues sponsored Saengerfests or singing festivals.

Several local organizations formed over the years. In 1937, the Gemischter Chor Harmonie was established as a men’s singing club. By 1952, the Gemischter Chor Harmonie had grown to become a mixed choir with both men and women members. However, membership slowly began to decline by the late 1950s due to the aging of the original singers who had been with the group since its founding. Television by this time was competing on the entertainment scene. Then in 1959, the singing groups, Gesangverein Echo, Gemischter Chor Frohsinn and Gemischter Chor Harmonie, decided to build a new hall on property that was donated by Gilbert Becker. This second Saengerhalle was built to continue cultural traditions like Seele’s hall built in 1850. The new Saengerhalle hosted many concerts and family events. In 1996, that hall was sold due to the inability to keep up the expenses.

The Gemischter Chor Harmonie is the only singing group that’s still in existence in Comal County after eighty-two years. They show resilience and dedication and they continue to promote the German heritage and culture through their music.

Research for this article was done by John and Cindy Coers for the purpose of applying for a Texas Historical Marker to be placed in Landa Park.

Your ticket for the: “Ein Prosit, ein Prosit” to music