Mom’s cousin was an Indian captive

August 4, 2019
Around the Sophienburg, Sophienblog 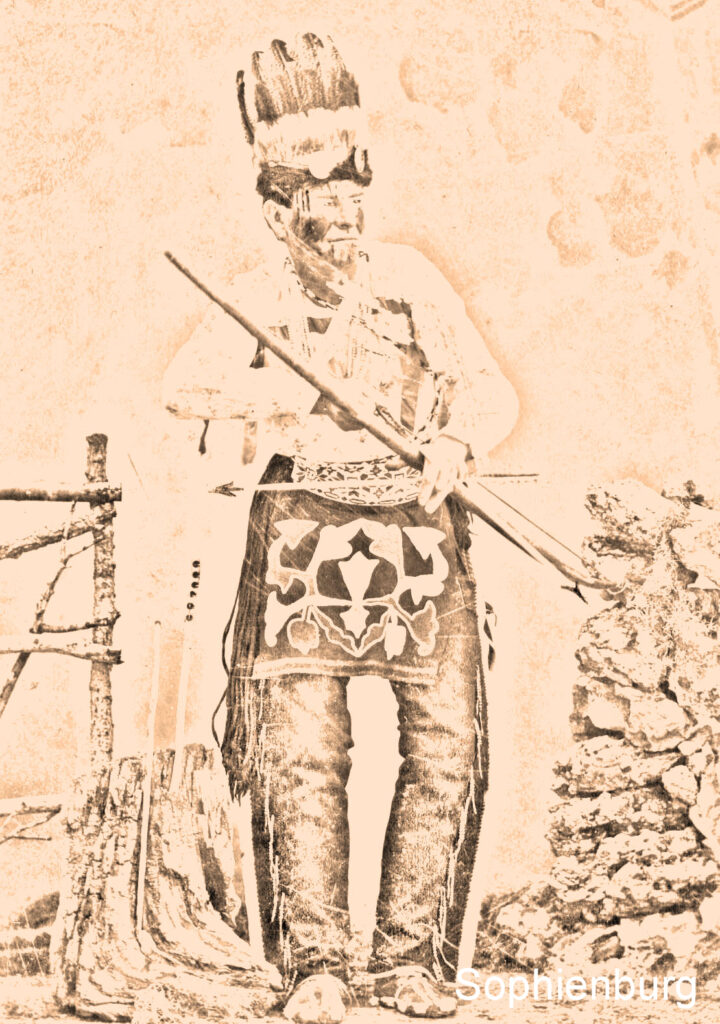 In May I traveled to Mason, Texas, with my mom and dad and met with some aunts, uncles and cousins to watch a 45-minute documentary: “Herman, der Apache: Ein Deutscher unter Indianen” (“Herman the Apache: A German among Indians”). The film, made by a German film crew for TV viewing in Germany, had been dubbed in English and was shown by the Mason County Historical Society. It is the incredible true story of Herman and Willie Lehmann’s capture by an Apache raiding party in 1870. The meet-up was a reunion of sorts. My mom’s family and the Lehmann family are cousins. I’ve always been proud of this blood connection.

I remember reading Herman’s autobiography, “Nine Years Among the Indians” (1927), and writing a book report on in it grade school. I read it aloud to my kiddos when we did a Native American unit (I homeschooled). I list it as suggested reading to teachers who visit the Sophienburg. According to J. Frank Dobie, it is “the finest of the captive narratives of the Southwest.”

Years ago, I attended a lecture on Native American tribes in our area. The archaeologist mentioned Herman Lehmann’s book with a definite snicker and said it was completely made-up. I took him aside afterwards and informed him that not only was the story true, but that I was related to the family — my mom being cousins with Esther, Herman’s niece. The archaeologist got really quiet and then apologized.

You really need to read Herman and Willie’s story to understand why this narrative is so compelling. I cannot condense the detailed memories of an 11-year-old German boy captured and raised by Apache and Comanche, nor will I really try. I will simply give you a taste of what is in store when you read the book.

Imagine that you, your brother and two little sisters are out in a field a little way from the house to chase the birds out of the ripening wheat. You look up to find there are eight Apache on horseback at the fence and, frightened, all begin to run, except for your baby sister who is hidden in the wheat. The Apache shoot at your other sister and she falls; they think she is dead. They get your brother and go after you. You are finally subdued after you have been slapped, choked, beaten and your clothes torn off.

You and your brother are each tied up naked to the back of a horse behind a warrior and spirited away from the only world you know. The group separates, each taking one captive. Totally alone you are made to catch a calf your group comes across. Your captor slits its throat, cuts open the stomach and drinks the soured milk out of it. He offers some to you which of course you refuse, so he pushes your face into the open stomach.

That’s just part of day one. Have I piqued your interest? It gets better, or worse, before it gets better again. Willie escapes after about a week and makes his way home. Herman isn’t returned to his family until he is 19.

I am fascinated at just how completely Herman becomes Apache. It wasn’t easy — not all captives survived — but he does and he does well. He is adopted into his captor’s family and initiated into tribal life. He describes being burned, beaten, tortured, whipped and other things that he cannot even talk about.

Herman eventually finds affection, respect and acceptance. He forgets his mother tongue and learns Apache. He is taught their customs and rituals: how to hunt with bow and arrow; raid, steal, fight with lance and shield, kill and scalp. He becomes a warrior tested in fights with Texas Rangers, Mexicans, white settlers and other native tribes. By age 16, the only thing that does not seem Apache about Herman are his blue eyes.

He spends six years with the Apache and a year alone in the wilderness before he is adopted into a Comanche tribe. He is Comanche in 1877, when he takes part in the Buffalo Hunters War, the last major fight between Native and Non-Native Americans in Texas. It is Quannah Parker who gets him to go to the reservation in Oklahoma and who adopts him as his son. In 1878, soldiers take Herman from Fort Sill and bring him back to Loyal Valley.

He was home. But he was no longer a German boy.

He knew Apache, Comanche and Spanish, but no German. He hated sleeping inside a house, so his brother Willie slept outside under the stars with him. He hated “paleface” clothing and often changed back into leggings and breach clout and painted his body. He stole the neighbors’ cows and horses. It took time to learn to be a white man, but the same character that allowed him to become Apache, served him well once again. Eventually he “fits in,” somewhat — even gets married and has children. But the “Indian” never left him.

My mom’s cousin Esther knew her “Uncle Herman” really well. She and her sister, Gerda, made an oral history recording about Herman for the Sophienburg in 1992. Herman came to live with his brother Willie in 1927, when Esther was three-and-a-half years old. She told us stories of sitting next to him as he told his Indian tales. She loved it when people would be over and he’d let out a war whoop just to make them jump. She helped him sneak fresh-killed deer down to the cellar when it was out of season, and watched him eating his deer meat raw, ground up with onion and salt. “He loved that life,” she would say. “They should have brought him back and let his mother know he was OK, then left him with the Indians. He would have been happier.”

And that is exactly what I took away from that documentary. Herman was perpetually caught between two worlds. That he was able to move between them at all is a miracle. That he found any happiness is amazing.

One more thing … it is said that Esther was the last person to have known an Indian captive. Wow.

More on This Subject

Your ticket for the: Mom’s cousin was an Indian captive

Mom’s cousin was an Indian captive