July 21, 2019
Around the Sophienburg, Sophienblog

The sharing of history comes in many formats including murals, oral storytelling, books, newspapers and sometimes social media. Recently a photo of the New Braunfels Brewing Company was posted on the “Remember in New Braunfels, TX when…” Facebook page questioning where that building was. The answer is the New Braunfels Smokehouse Plant on North Guenther Avenue, but for all those new to the area, here is a little more to that story. The following article appeared in the New Braunfels Herald-Zeitung on July 27, 2010. 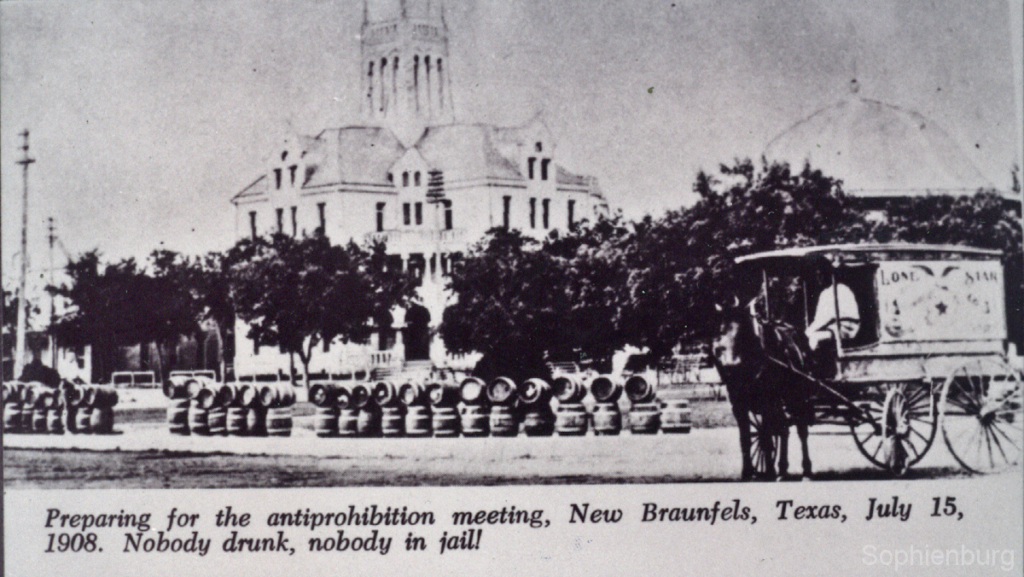 At 12 noon on October 12, 1920, an airplane crashed into the New Braunfels Brewing Company, one of four breweries in New Braunfels at the time. The NB Brewing Co. was located at the end of North Guenther Street (NB Smokehouse Plant).

Two pilots from Kelly Field in San Antonio had landed in NB, eaten lunch, and taken off again. Suddenly the pilot seemed to lose control of the plane and was heading straight towards the brewery. When it seemed certain that the plane was going to crash, one of the pilots unfastened his safety belt and jumped out, landing safely on the galvanized roof. The other pilot perished when the plane hit the third floor of the brewery. The impact created a large hole and the heavy motor dropped to the cement floor in a blaze of blue flame.

As if the NB Brewery didn’t have enough problems! In January the federal Prohibition Amendment (18th) made the manufacturing and sale of alcoholic beverages illegal and this brewery resorted to making a weak beer called Busto just to stay afloat and not drown.

The question of Prohibition had been in politics for a long time. Drinking alcohol was thought to be one of the main reasons for wide-spread social problems.

When Texas was a Republic, Prohibition was dealt with by “local option”. (Decisions of law would be left to towns, counties, even neighborhoods.) I have read that Texas banned saloons in 1845. I don’t think the Germans knew that here. Obviously the law was never enforced.

The state constitution of 1876 had required the legislature to enact a local option law. Eleven years later the “drys” (those in favor of Prohibition) presented a state Prohibition referendum, but lost. Add another eight years and 53 counties were dry. Can you guess which category Comal County fell into? A very strong push by the Anti-Saloon League in 1908 to put all of Texas under Prohibition failed, but slowly the number of dry counties was increasing.

Locally in 1908 the Republican Club of Comal County organized for the purpose of fighting Prohibition in Comal County and Texas. They would send delegates to the next Republican State Convention and demand a straight-out anti-Prohibition plank “to protect personal rights and liberties guaranteed by the Constitution of the United States” (Source: Sesquicentennial Minutes, Roger Nuhn). The NB photo from 1908 with the message “Farewell to our Local Self Government” appears to be bearing a casket.

Then in 1916 under the leadership of Texas Senator Morris Sheppard the campaign in favor of national Prohibition successfully passed the 18th Amendment. The Texas legislature ratified the federal Amendment in 1918 and Texas voters approved the state Prohibition Amendment in 1919.

Organized crime sprang up, especially in large cities and the controversy continued in Texas about how to use the amendment. Did it mean strict enforcement or not? In 1925 Prohibition opponents were in control of Texas and refused to support enforcement measures. When the Great Depression of 1929 happened, the federal government, needing liquor tax money, repealed Prohibition with the 21st Amendment. Texas reverted to local option where it is today. Presently there are 51 dry counties.

Was NB affected? Yes and no. Some of the liquor production went underground. I’ve heard some crazy stories, including chases by the “feds” and underground tunnels, but none substantiated. It wasn’t illegal to drink liquor, only to manufacture and sell it. It was okay to ferment fruit (wine?); okay to provide communion wine; and okay for doctors to prescribe liquor for medicinal purposes.

Headlines in the Herald August 19, 1933: “Comal County Lays Plans to Dance Prohibition ‘Out’ in Monster Street Demonstration on Plaza August 19th”. A giant dance with Judge Klingeman and Mayor Fischer leading the grand march. Prohibition was over and so was Busto Beer.

Your ticket for the: Prohibition unpopular in New Braunfels