Sophienburg Museum and Archives > Blog > Around the Sophienburg > What is pannas?

March 17, 2019
Around the Sophienburg, Sophienblog

Many of us grew up eating “pannas.” My grandmother made it often, especially when the menfolk were butchering and making sausage. She would take the hog head into the kitchen and put it in a big pot of water. I would come into the kitchen and see that big snout sticking up out of the top of the pot. As the water boiled, all that good meat in the hog’s cheeks fell away and created a lovely rich broth. She took that broth full of meat bits and added spices and cornmeal before pouring the whole lot into pans to cool. Grandma then cut the cooled pannas into slices, turned it in flour, and fried it up for all us waiting children. Yummmmmm …

But why did we make pannas? Back in the day, nothing was wasted. The making of blood sausage, liver sausage, and pannas, was a way of making sure everything from the butchering process was used.

Corn is a “New World” food — the cultivation of corn began about 7,000 years ago in central Mexico and spread into North and South America. It was introduced to Spain by Columbus. Early Anglo-Americans would have died of hunger had the Native Americans not shared with them how to cultivate and eat corn. They showed them how to make corn into bread, porridge, pudding, soup, and fried cakes. The early German immigrants to New Braunfels were not in the habit of eating cornmeal, as back home corn was something they fed to pigs. They were used to using wheat as the main staple in their diets. Pannas helped them get used to — and learn to embrace — corn.

There are a lot of different spellings and names for pannas. In the Midwest and northern US, many folks call it “scrapple.” Scrapple even has its own national day — November 9th. Although scraps of meat are used in the recipes, the word “scrapple” comes from the process of scraping the large cast iron pot used to cook the pork. Our archives coordinator at the Sophienburg remembers her grandfather making scrapple in a huge cast iron kettle when she was a child. She’s from Pennsylvania and they called the result “ponhaws.” They ate it fried for breakfast and smothered it with King Syrup, a blended golden syrup of corn and sugar syrups.

We have several volunteers from Northern Germany who did not grow up eating pannas, but the Sophienburg has had German visitors who have told us it is made and eaten in parts of Germany now. They call it Grützwurst or grain sausage.

To me, pannas is sort of like a deconstructed tamale with different spices. Maybe the Germans just didn’t get into the whole tamale preparation thing and came up with their own quick way of using pork and corn. It really doesn’t matter because the result of both is DELICIOUS.

Is pannas is new to you? If you are curious or just feeling adventurous, you can try the recipe from Ora Mae Pfeuffer in the Guten Appetit! Cookbook sold by Sophie’s Shop. This recipe uses pork bones, pork sausage or hamburger. Pannas can also be made with beef, turkey or ham. My mom always uses the leftover ham and ham bones from Thanksgiving and Easter to make us pannas. We eat it for any meal: Fried with eggs or fried and laid on toast — and we put mustard on it.

The old Krause’s Café used to sell pannas in the butcher shop area. My brother has been trying to recreate that recipe, but if you ask him for it be prepared. It makes a ton of pannas. Today, the only place I know of that you can buy pannas “readymade” is at Granzin’s Meat Market. Let us know what you think.

P.S. In regards to the “gold” treasure chest story, I was given information that descendants of one of the gentlemen who found the chest still have it! They bought it and keep it safe. Imagine passing down a treasure chest in your family. Real or fake it would be amazing! 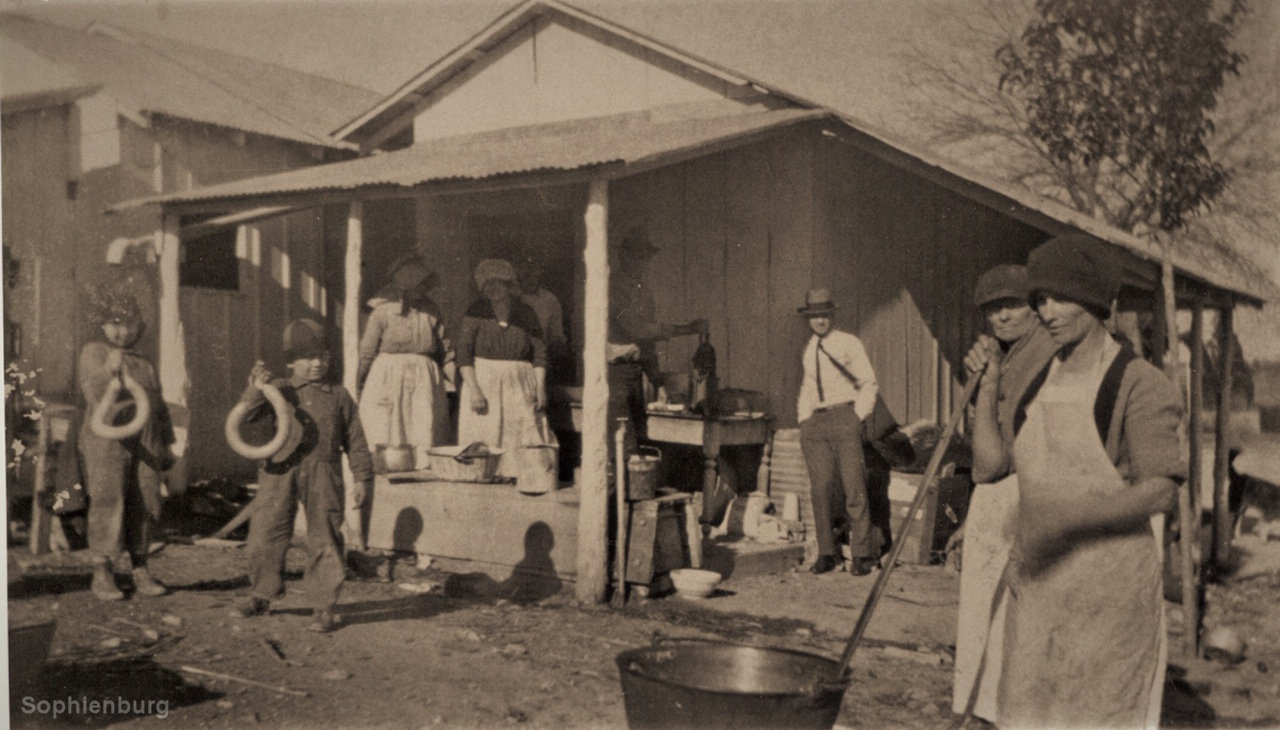 Family butchering in 1926. Notice the size of the sausage links and the women rendering the hog fat to make lye soap.

Your ticket for the: What is pannas?