Sophienburg Museum and Archives > Blog > Around the Sophienburg > Heroes and history

August 19, 2018
Around the Sophienburg, Sophienblog

Kids of all ages gravitate to superheroes. I come from a time when the superhero list was relatively short: Superman, Mighty Mouse and Sky King. My favorite was Sky King, of course. But my real heroes — the ones I pretended to be in the backyard with all my neighborhood friends — were firemen. When your family members and your friends’ family members are firemen, it seems kind of a natural thing to play. Perhaps that’s why I find the history of the New Braunfels Fire Department fascinating.

Back in January 2017, Myra Lee Adams Goff covered the early history of the fire department (from 1874 up to about 1918) in her Around the Sophienburg article, “New Braunfels Fire Department — years of service”. In 1918, the city built and outfitted a new state of the art fire station, complete with three engine bays and sleeping quarters upstairs for the first paid firemen. That station became known as Central Station. It was the heartbeat of the firefighting community, for both paid men and volunteers. As a child, Central Station WAS the fire station to me. It held the shiny red engines in its neatly painted bays with pressed tin ceilings. The bay doors were almost always open and the firemen would often sit on the metal benches out front. This station also had a tower with a siren that went off exactly at noon every day without fail (or some poor young fireman would catch heck). That siren was the signal that my Opa would be home for lunch in 5 minutes. The tower isn’t there anymore, but the original 1918 station stands ready right next to the new Central Station. That building, located at 131 Hill Ave. is now the Fire Department Museum, and you can see all the cool history inside.

As New Braunfels grew, so did the need to protect the city. A community’s fire rating (insurance rate) is based on the building codes and the fire department’s ability to reach and extinguish a fire in the shortest amount of time. In 1931, the city saw fit to build Station No. 2., the one-story building that stood on the corner of Coll and Sycamore (next to the water tower) enabling fire coverage without having to wait for a train. The station originally housed one truck (the 1913 American LaFrance moved from Central Station) and two firemen with their families. Yes, families. R. Ebensberger and Hilmar Voigt were the first to occupy the station with family living quarters. Hilmar H. H. Chili Voigt was my Opa. He and my Oma moved in for a short time when my aunt was 11 and my uncle was 5. The station was replaced with the current Station No. 2. located on Loop 337 near Solms in 1975.

Station No. 3 was in Comaltown which was annexed by New Braunfels in 1868. Comal did have a fire house on N. Houston Ave. near where Lamar school is now, but it was torn down in 1925.

In 1950 the city bought and refurbished a 2-story building on the corner of Union and Garza (now Christus’ parking lot). The building had housed Simon’s Garage & Service Station on one end and Dolle’s Saloon on the other with the Hermann Son’s Lodge upstairs. From 1925 — 1950, fire protection had to come from Central Station across the Comal River. Station No. 3 remained in service until 1983 when the current station was built on Hanz Lane.

To give you an idea of the department’s growth, in 1918, the department operated with three to four paid men and four companies of 15 volunteers each. By 1973, there were 28 paid men and 60 volunteers. Today there are 135 paid firefighters. The volunteer organization dissolved in the early 2000’s.

My Opa started with the fire department as a volunteer in about 1922. He became a ‘paid man’ in 1931, made Assistant Chief in 1958 and retired as Fire Marshal in 1966 after 35 years on the job. He also was a house painter/paper hanger, as most firemen needed a second job to make ends meet. Both my dad and uncle were members and officers of the New Braunfels Volunteer Fire Department for over 20 years, as were many of their friends. It was a way to give back to your community. The “hero games” we played as kids revolved around what we heard and saw. We pretended that the “Plectron” would go off (an electronic notification system at each volunteer captain’s house). One of us would jump on the “truck” (bicycle) and the other would stay by the phone, activating the “phone tree.” We also practiced for Pumper Races with the garden hose. As we got older, we took pride in being able to identify any firetruck coming our way—without seeing it, just by the sound of its siren. My favorite story about Central Station involved my Opa and my uncle. During WWII my uncle had joined the Army and, after completing basic in San Antonio, the soldiers shipped out by train. No one was allowed to notify family of their new orders or duty stations. My uncle knew that the train would pass right in front of the fire station, where the men sometimes sat out front on benches. He wrote on a rock he had picked up before boarding. Just as the train pulled through downtown New Braunfels, he stepped out onto the platform and threw the rock towards the fire station. My Opa no longer worried about my uncle going overseas. The rock said, “Aberdeen, Maryland.”

Firemen were — and are — a brotherhood. They risk their lives daily to protect the community, buildings, and people from fire, flood and disaster. They work hard and play hard, but they alone know what they see in their work and they carry it with them. THEY are my heroes and their history lives in the 1918 Central Fire Station. She looks pretty grand for 100 years old. 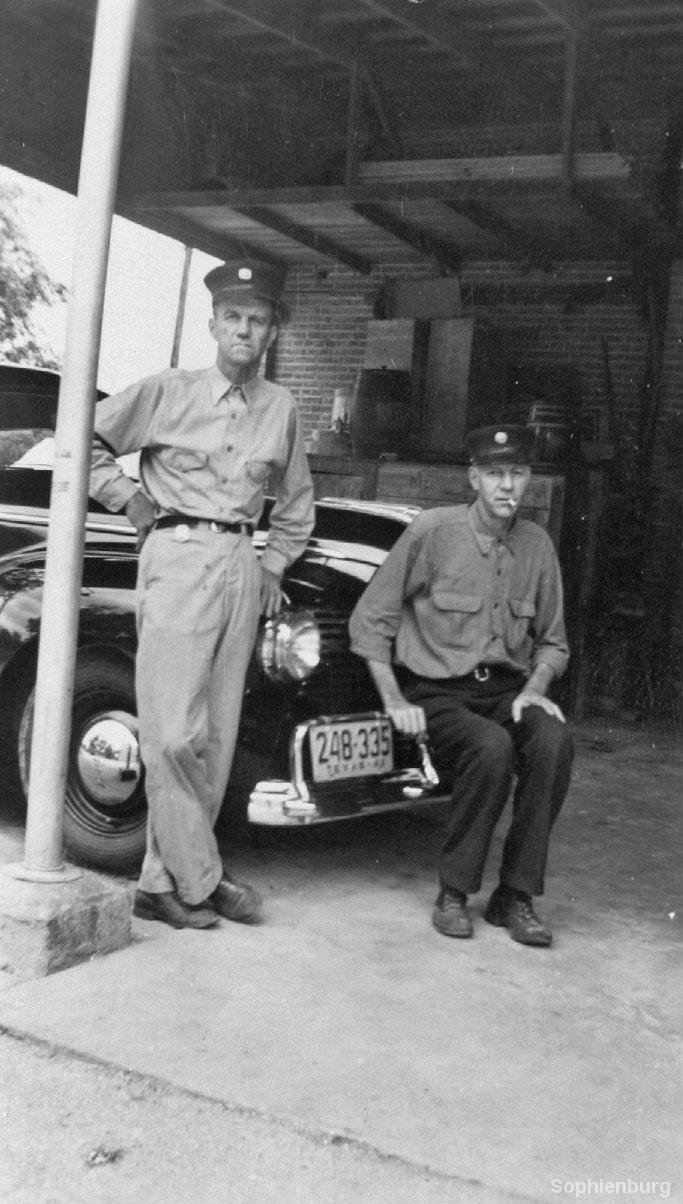 The back of the fire station during shift in 1946, Chili Voigt and unknown fireman.

Your ticket for the: Heroes and history