April 28, 2019
Around the Sophienburg, Sophienblog

Almost everywhere we go in New Braunfels, there is history hidden in plain sight. Perhaps it is something we drive by daily, but when asked about it, can’t recall where it is. Perhaps it is a building that looks like any other built within the last twenty years, except it is closer to a century old. Some things we just take for granted, like “ice”. Yes, ice, that clear, cold object floating in your tea prompting the name, “Iced tea”. Have you ever thought about how they got “ice” in South Texas? It is available from the door of most refrigerators now, but what about a 175 years ago? Ice has only been manufactured in New Braunfels for a little over a hundred years.

It is fairly easy to understand that the meals prepared by the founders of New Braunfels were probably meager by our standards. They ate what they hunted and harvested fresh from the garden because the food spoiled quickly. Meats were smoked or dried to preserve them. Vegetables and fruits were canned or made into jams to have food throughout the winter months. Up North, ice was harvested from the frozen lakes and streams during the winter and stored in ice houses. The ice was then delivered by wagon to help keep food cool in ice boxes during the summer months. Large blocks of ice were put into the top compartment to keep the foods cool below. By the 1850s, ice was being shipped to the southern U.S. by special insulated trains and boats. In 1859, French engineer Ferdinand Carré patented the first absorption refrigerator. One of his machines was shipped through the Union blockade to Mexico and eventually was moved into San Antonio, Texas. By 1867, there were three companies in San Antonio making artificial ice. By 1900, there were 766 ice plants in the U.S. with 77 in Texas. It wasn’t until 1916 that New Braunfels got its first ice plant, Citizens Ice Company, built by E. A. Clousnitzer.

Located at 262 Jahn St., Citizens Ice Company plant consisted of a mechanical refrigeration system, water cooling tower, ice pit that formed 300-pound blocks of ice and a cold storage vault. The plant originally had the capacity to produce ten tons of ice per day. A 1926 expansion increased the output capacity to thirty tons per day. The ice was delivered by horse-drawn wagon to homes in New Braunfels. The ice plant was in full operation until about 1960. It sat vacant until restored and made into a discotheque/supper club called “The Ice House” by Mike Kilgore in 1974. Since then, it has had several incarnations as a club/bar and is currently known as “Conway’s”.

Mr. Clousnitzer was quite the entrepreneur. Born in Germany in 1869, he not only built Citizens Ice Company in New Braunfels, he built a second plant in Taylor, Texas, and obtained a plant in Temple. He was very civic minded and generous to this beloved city. In 1935, he donated the Civil War Memorial “To the Memory of our Fallen Soldiers of the Civil War 1861-65”, honoring all soldiers of that war. In 1937, he donated a second war memorial, “The Spirit of the American Doughboy”, honoring the soldiers of World War I, as well as donating six palm trees which were planted along the streams of Landa Park. Both statues can be found on the plaza. You can read more about them in the Around the Sophienburg article by Myra Lee Adams Goff at https://sophienburg.com/statues-on-plaza-honor-soldiers/.

There was also another ice plant in New Braunfels, not quite as easily seen, but you probably know it. New Braunfels Brewery was established in 1918. Since brewing beer and ice for cooling went together, the New Braunfels Ice Company was begun within the same plant. Located at 441 N. Guenther St., it produced 300-pound blocks of ice. By 1922, New Braunfels Ice doubled their capacity. During prohibition, the brewery closed and the ice plant was acquired by South Texas Ice. In 1945, RK Dunbar bought the company. He eventually sold off three of the plants and kept the two located in Seguin and New Braunfels. In 1950, when the Dunbars established the New Braunfels Smokehouse restaurant, the ice portion of the business still operated under the name South Texas Ice for many years. The Seguin plant was sold off in 1974. The Smokehouse continued to make block ice until the mid-80s when they began producing the clear cubed ice that you find in your ice chest or party drinks today.

Look at that, a whole article about something as small as an ice cube. Drive around, see what you’ve missed and stay cool! 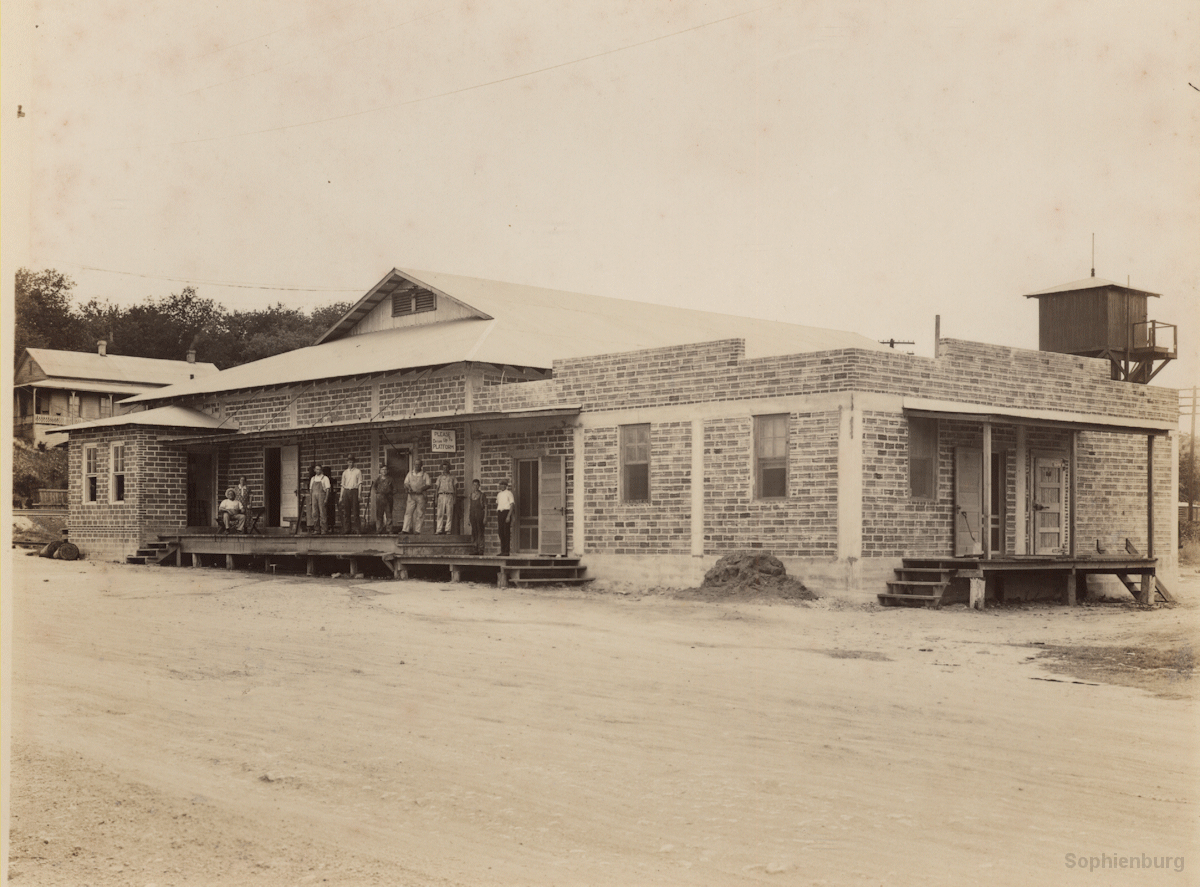 Your ticket for the: Hidden in plain sight