The Moeller family of Comaltown

February 16, 2020
Around the Sophienburg, Sophienblog 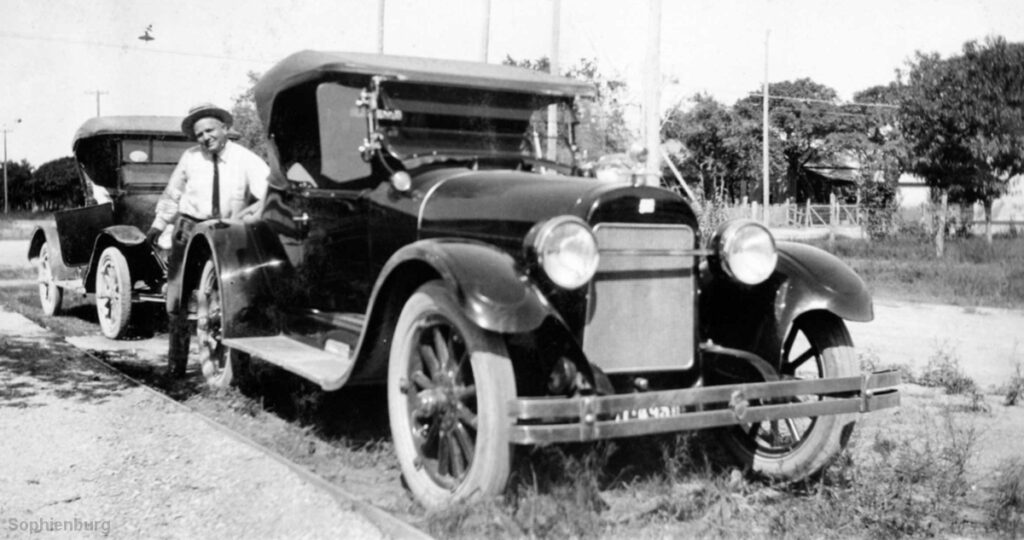 New Braunfels has an historic and active downtown. In order for that to happen, three things are necessary. First, the buildings themselves must be of lasting quality. Secondly, an active preservation philosophy must be prevalent. The third is to have creative successful business owners. We are fortunate to have all of three.

As I drove around Main Plaza, on Seguin Avenue and down San Antonio Street, I was surprised and pleased to count 17 buildings built in the early 1920s by my grandfather, A.C. Moeller. This prompted me to do research on the Moeller brothers of Comaltown.

The Moeller family has been involved in building since their immigration to Texas and the formation of Comaltown. The story began, as so many do, in a German town called Michaelsrombach. Several years ago, I was able to visit this beautiful tiny village where the emigrant, Johann Georg Moeller, was born. It was a charming place. The house where the Moeller family lived dates back to the 1600s. The stone house stands almost in the center of the village and is still occupied by Moeller descendants. Originally, cows lived on one side of the house to protect them from the winter elements but over the years, additions were made to the home and the cows are gone. A beautiful Catholic church sits on a small hill overlooking the village. The Moellers attended this church and went to school there. The adjoining cemetery contains many Moeller graves. It is a very strange feeling to realize that all those buried there are my ancestors. Michaelsrombach seemed like a fairy tale place to grow up in.

Johann was 25 years old when he left the harbor of Bremen and sailed on the ship Weser. His Reisepass (passport) stated that he was 5 foot 2 inches tall, had blond curly hair and blue eyes.

There were seven men and one woman aboard the Weser from Michaelsrombach. I wondered why they left such a beautiful town. Then I found a statement made by historian, Rudolph Biesele, from his research on emigration. He writes: “Generations ago when German tribes were still living in their primitive social development, they frequently undertook adventurous enterprises under leaders especially chosen for that purpose. These expeditions developed among the early Germans an adventurous spirit for which in a much later period they used the term ‘Wanderlust.’ This Wanderlust or desire to wander, has remained with them through all the ages as one of their national characteristics.” Sound familiar?

Most of the Michaelsrombach emigrants were young men in their 20s. One couple, Peter and Maria Reus, were each 50 years old. Others were Johann Georg Moeller, Johann Arnold, Valentin Fey, Johann Schneider, Johann Schwab and Thomas Schwab. Why so many Johanns? Looking over so many family trees, I noticed that the oldest boy was named Johann. In America, most of these Johanns were referred to by their middle name. So, from this point on, Johann Georg Moeller will be referred to as Georg Moeller. His first son, who was named after him, became the Americanized name of John.

These immigrants, and 84 others, had been asked to settle Texas by Henry Fisher who had arranged for them to sail on the ship Weser. They arrived in Galveston in July 1844, five months before the Adelsverein immigrants. Prince Carl was to meet the Henry Fisher group in Galveston, but he left to secure another port for the Adelsverein immigrants to disembark. He established a port at Indianola and by December 1844, 292 immigrants had landed and awaited their trek inland. On March 21, 1845, the immigrants crossed the Guadalupe River into New Braunfels. Many of those from Michaelsrombach came with this early group. Georg Moeller did not make the trek with the immigrants but arrived soon after and settled in Comaltown. We do not know why he didn’t wait with the other immigrants, but could he have given in to Wanderlust? Nevertheless, we know that he arrived in Comaltown soon after the March 21st group. In I846, Georg married the widow Katherine Hoffmann; her husband had died shortly after the family arrived leaving her with two children. Eventually, Georg and Katherine had one daughter that died and then three sons. They were twins John and Franz and then Louis (Ludwig).

Georg bought a large piece of property in Comaltown and it was on this property that he built a magnificent two-story rock house that still stands at 212 West Austin Street. Supposedly, the rock was hauled from a nearby quarry on Rock Street. All the walls are constructed of smooth hand-hewn limestone. Heavy cedar beam staircases lead to a basement. No nails were used. After Georg died in 1857, the house was occupied by family members and eventually sold by the three sons. The most recent acquisition was by Schlitterbahn. In 1970 the house received the Recorded Texas Historic Landmark designation.

It is in this second generation that fellow researcher David Hartmann and I branch off. We share Johann Georg and Katherine Moeller as our first ancestors in New Braunfels. My great grandfather was John Moeller and David’s g-g grandfather was Louis Moeller. John Moeller continued in the building trade, constructing homes in the area. He also built a Victorian home in 1894, on the corner of Union Avenue and Camp Street, which still stands. On the back of this property, John had a small lumber mill. It was here that John and wife, Anna Rauch Moeller, raised their four boys and exposed them to the building business. Adolph was the oldest, then Ed, then Herman and last Alwin Carl Moeller.

Adolph Moeller carried on the building tradition and was known as a commercial builder. Several well-known downtown buildings were built by him: Fire Station #1, the old New Braunfels High School on Mill Street and many houses including his beautiful home on Garza Street. Ed Moeller is listed for a short time as a builder but spent most of his time as the owner of the bus station where the Celebrations Store is on Seguin Avenue. He was also involved in politics and became sheriff for a time. Hermann was listed as a carpenter.

And now we have the story of the prime builder of the Moeller clan: Alwin Carl “Kid” Moeller. He was my grandfather. To this day, his name is imprinted as “A.C. Moeller, Contractor” all over sidewalks and cornerstones in town, especially downtown. At an early age, he learned the contracting business from his oldest brother Adolph. A.C. went into business for himself and from the early 1920s until he died in 1936, he constructed many buildings. About 17 buildings downtown have cornerstones which carry his name. Some notable buildings that you are probably familiar with are the Seele Parish House, the Richter Building, Johnson Furniture, the Phoenix Saloon addition, the complete remodeling of the Doeppenschmidt Funeral Home, Plaza Drug Building, Comal Flower Building, the Black Whale, the Bus Station and many others. He built the first annex to the Courthouse (for $73,000) in 1930, the Garden Street Bridge and the textile mill dam across the Guadalupe River. Aside from commercial buildings, he was an expert on homes in the bungalow, craftsman and Prairie style. Some of these homes have been converted into offices contributing to the conservation of downtown. The law office of Jack Borchers on Seguin Avenue is a good example of a converted home to an office. Another example is the red brick Prairie style home on East San Antonio Street, owned by descendants of the Wagenfuehr family. Hundreds of A.C. Moeller homes still stand in New Braunfels and benefit from his skill at building. In 1924, he was awarded a big contract with New Braunfels schools to build Lamar School, Carl Schurz Elementary, Steven F. Austin School and the Home Economics Cottage for the high school on Academy Avenue. One of his last projects was the remodeling of the bandstand on Main Plaza.

Alwin Carl Moeller died in 1936 and it can definitely be said that he was one of those who “left footprints on the sands of time.” Also, I’m right about what I said about what makes a viable downtown. The Moeller brothers built buildings that last and are worth saving and we have people in NB who recognize the importance of preservation.

Your ticket for the: The Moeller family of Comaltown

The Moeller family of Comaltown