Sophienburg Museum and Archives > Blog > Around the Sophienburg > Queen of Hearts

February 2, 2020
Around the Sophienburg, Sophienblog 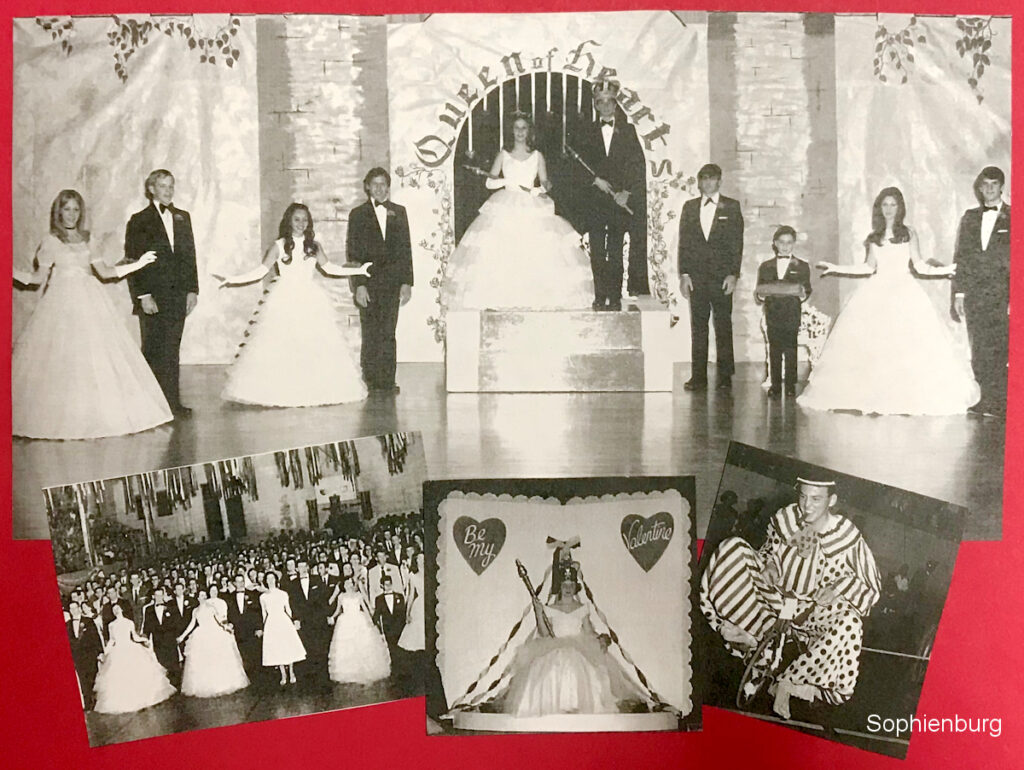 There’s been a lot of chatter on a local Facebook group recently about Queen of Hearts. In an effort to satisfy inquiring minds, I did a little research. The Queen of Hearts is an age-old tradition of a bygone era (which is really hard to say and harder to see in print since I was around for some of it). Queen of Hearts was a week-long New Braunfels High School fundraiser that took place each February. It was THE social event of the year, featuring competition between the classes to finance the Unicorn yearbook. The week of competition culminated in a formal dance and crowning the winner, Queen of Hearts.

The very first Queen of Hearts was held in 1937. The Unicorn Band came up with the idea to hold a concert and dance to raise funds for the band. Along with it, they sponsored a contest to elect the Queen of Hearts. It was open to any girl in the area. Votes could be purchased for a penny a piece with votes being cast at Peerless Pharmacy, Richter Pharmacy, Plaza Drugs or in the Principal’s office. The winner that year was Mary Louise Hobson. The total amount raised was $17. That may not seem like a huge amount, but it was a lot in the post-Depression era.

In 1938, Queen of Hearts was promoted as a Valentine Carnival featuring a dazzling floor show, Games of Luck, Games of Skill and a supper which was sponsored by the Future Homemakers and the Senior Class. Instead of buying votes for the Queen, classes competed to raise funds to help finance the yearbook. One girl representative was selected from each class. The class earning the most money through their projects had their representative crowned queen. New Braunfels High School was located on Mill Street at that time and housed six classes of students 7th through 12th grades.

Queen of Hearts continued to be held annually, but the class competition projects changed and grew with the times. In 1940, participants from all six classes took part in the floor show entertainment for the coronation. The identity of the Queen was secret until coronation. At that time money was raised through service type activities. LaVerne Schwab Pearce remembers that during WWII, the classes collected/sold scrap newspapers, aluminum and iron and turned it in for money. She also remembers that cake bakes, which have always been a staple of Queen of Hearts class projects, did not take place during the War Years because sugar was rationed. Although the fundraising competition was held, there were actually no annuals produced for class years 1943 and 1944 due to shortages and rationing of supplies.

For many years the upper classmen would easily win the competitions, but in 1944, the 8th grade class stunned everyone by getting their candidate, Rachelle Mendlovitz, crowned Queen . In 1948, the designation of monies for yearbook changed slightly to include campus beautification.

By 1950, the funds raised were strictly to help offset the cost of printing the yearbook. Myra Lee Adams Goff remembers that one of the reasons that she was crowned Queen of Hearts was because her mother made “thousands of pralines” to sell. They were more popular than cakes or pies.

The Class of 1951 was the last class to graduate from the high school on Mill Street. The following year only the top three grades moved to the new Guenther Street high school. Mill Street became the junior high with grades seven through nine. In addition to having fewer classes competing, the 1952 Queen of Hearts decided to include the election of a King of Hearts in same manner as queen. Apparently, it had a surprise ending as Senior Esther Kanz was voted Queen and Sophomore Malcom Bartels was voted King. That did not set well with the classes. The following year, Class representatives were chosen as a pair. The first King and Queen of Hearts chosen as a pair were Juniors Mary Lou Obercampf and Charles Hower. Queen of Hearts celebrated their Silver Anniversary in 1962, also the year the current NBHS opened on the hill. They raised $2484.04 that year. By 1972, the classes easily raised $5260.09.

The 1970s and 1980s saw little change in the format or the money making projects, some of which included singing valentines, car washes, bake sales, Rent-a-Kid, and Queen of Hearts supper. The coronation ceremony had all the pomp and circumstance of any coronation in Europe. The trumpeters still heralded the entry of the court into the gym. The queens, each in ball gowns of white, performed a Texas Dip (deep extended curtsy) to her escort at center court before taking their place on the stage. In 1995, that all changed. The students still raised money through projects and competed for points in a “fun night” of games, but the annual dance was done away with. The coronation took place right after Fun Night and the girls wore casual street length dresses. As time progressed, Queen of Hearts popularity waned. There were multiple factors contributing to the decline, one of the most important being the inability to serve or sell homemade goods after a city hepatitis outbreak. Another was the district’s contract with an outside food service company that prevented any outside food sales on campus or use of the cafeteria for the spaghetti supper. The culture of the high school also changed, with overtaxed teachers and administrators no longer willing to support a tradition that did not directly benefit them. Queen of Hearts disappeared for a couple of years. In 2000, it made a return in a very pared down version that consisted mostly of Fun Night and the casual coronation. It lasted only a few more years before sputtering to a stop. The final Queen and King of Hearts were crowned in 2003 with monies going to Habitat for Humanity. According to what I can find, Queen CandiZeitungce Box and King Jody Walker will forever hold that notable distinction. The list is too long to print in the Herald-, but there is a complete listing of all of the Queens and Kings of Hearts from 1937 to 2003 below.

Request: The Sophienburg Museum and Archives is missing some NBHS annuals from our collection. If you have annuals from 1977, 1978, 1994-99, or anything after 2003 that you would like to donate to the Archives, we would gratefully take them.

Your ticket for the: Queen of Hearts