Sophienburg Museum and Archives > Blog > Around the Sophienburg > The Toepperweins, Texas treasures

July 7, 2019
Around the Sophienburg, Sophienblog 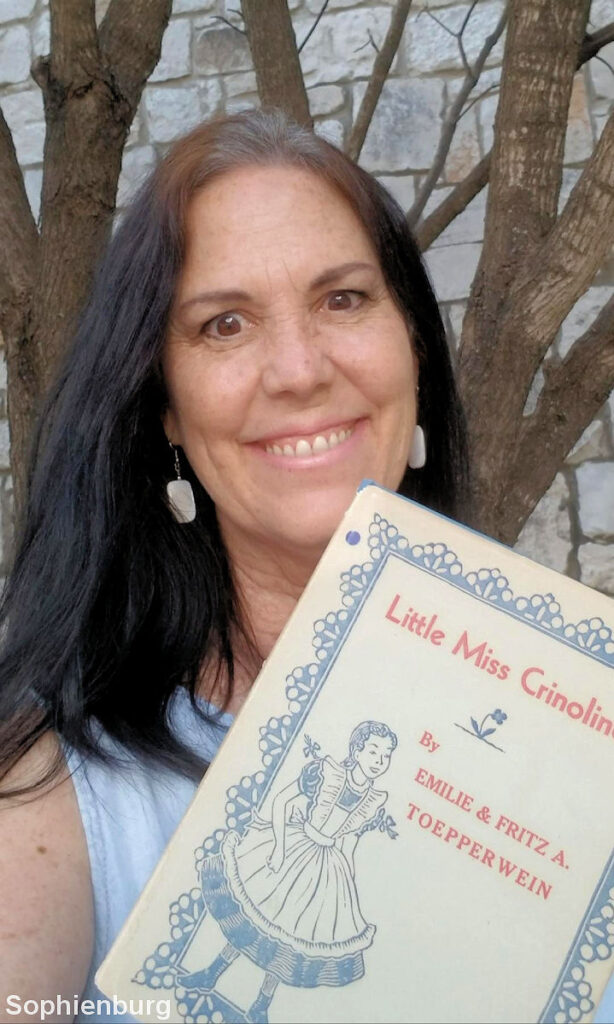 Keva Hoffmann Boardman shows off her copy of Little Miss Crinoline by Fritz and Emilie Toepperwein.

One of the things I really love about New Braunfels is the way folks have of helping each other and sharing information. I was recently contacted by the New Braunfels Public Library about two children’s books which had been pulled from the library’s general collection. Would the Sophienburg like them? They were by the same author, Fritz Toepperwein. A bell sounded in my crowded brain. Toepperwein? Wasn’t that the author of Little Miss Crinoline? Heck yeah, we want the books!

Ok, I’m a little geeky when it comes to books. I blame my mom. As an elementary school teacher, she taught me to read well before I started school. (A good thing, but it actually contributed to my getting Ds and Fs in deportment.) Both my brother and I can easily waste — no, enjoy — hours of time by reading.

Little Miss Crinoline (1951), was a book we read in school. It’s about a little girl who lives in New Braunfels! She goes through various difficulties, (the result of the teasing of several boy schoolmates) while her mom works at the Schmitz Hotel. The story is set in 1876, and brings early New Braunfels to light in a charming way. The book is only 47 pages long, including the illustrations which are zinc etchings by Fritz Toepperwein’s wife, Emilie. I loved the story as a child, and I just reread it again. And yes, I have a personal copy.

The trip down memory lane triggered an interest in Fritz and Emilie Toepperwein. “Googling” brought little to the surface so I went to the source: Boerne, Texas. It was Fritz’s hometown and he had deep roots there. Conversations with the local experts at the Patrick Heath Public Library led me to vertical files of news clippings and a list of Toepperwein books in the rare book collection. Rare books? Yep, they were only printed once. The Toepperweins had a fervent desire for producing quality children’s books, so they set up their own printing company, The Highland Press, in Boerne. Their books, printed from the 1940s into the 1980s, were meticulously researched and most were completely hand-crafted: hand-cut block and engraved zinc illustrations with hand-colored frontispieces; handset type printed on a hand press one page at a time, hand-gathered, sewn and bound. So far, I’ve come up with a list of 13 books written and illustrated by the two as well as collaborations on at least 11 more books, booklets or newsletters.

Most of the titles reflect the Toepperwein’s passion for Texas history: Little Deputy (1945), Jose and the Mexican Jumping Bean (1965), or I Want To Be a Cowboy (1947). Long-time members of the Texas State Historical Association, Fritz and Emilie were a well-known and respected part of the Texas history crowd. They were reviewers of Texana books for the Southwestern Historical Quarterly. They traveled all over the country talking to groups, selling books to schools and libraries and conducting oral histories. Several of their books were used at the New York Public Library as readers for non-native English speakers.

When the Buckhorn Saloon in San Antonio was acquired by Lone Star Brewing Company in 1957, the Topperweins designed and set up the dioramas and exhibit halls. Years later, working once again for Lone Star, the two designed and led the installation of the Hall of Texas History Wax Museum in the Lone Star Pavillion at Hemisfair ’68. We had season passes for Hemisfair, and going to the Hall of Texas History was one of our favorite spots — that and the guys from Mexico that swung down a pole on ropes after sacrificing a topless lady. The Lone Star Pavilion was free, but it cost 50 cents to go into the wax museum. There were 15 life-size wax dioramas depicting “historical actions” from 1532 onward. Along with exhibits of Sam Houston, the signing of the Texas Declaration of Independence and the invention of barbed wire, there was an exhibit depicting the scalping of a man. I remember it vividly because the horror of it totally fired up some part of my brain.

Early on in their author-illustrator-publisher careers, they encouraged children to write by sponsoring contests like the “Best Letter to Santa Claus Contest” during the 1940s. First open just to Boerne school children, the contest proved so popular that the Toepperweins opened it up to the entire state. In the 1946 contest, thousands of letters flooded into Boerne’s post office; the “St. Nick’s Mailbox” reportedly held a half-ton of letters! What did children ask for? A San Antonio Express article quoted Fritz saying, “anything from imported perfume for an older sister to a new car for Pop … usually, too there was the generous urgent plea, ‘Don’t forget all the other little boys and girls.’”

The Toepperweins regularly authored articles for the Ladies Home Journal as well as an article for the London Times. They wrote and produced several centennial pageants in Texas, including New Braunfels. They also produced the homecomings of Lyndon Johnson in Johnson City, and Dale Evans in Uvalde.

I’m now on a quest to gather up copies of the Toepperwein books. The Sophienburg has three Little Miss Crinoline, Handicraft Printing in Texas (1954) and one phenomenal book, Charcoal and Charcoal Burners, (1950) reprinted for the Texas Sesquicentennial, about cedar chopping along the Guadalupe which I hope share with you in the future.

In 1954, in a presentation to the annual meeting of the Texas State Historical Association, Fritz had this to say:

I will tell you about our humble effort in handicraft publishing in Texas … not visible, but surely there, are the songs of the birds outside our studio windows, as we work over the setting of the type, and the printing of the page. Many nights when it is late, the songs of the night birds filter onto the printed pages and it always makes that particular page mean so much more to us in our books. It is the poetic compensation, which we count for most in our publishing of books at our Highland Press in the green hills of Boerne … We are very certain what we will be doing for years and years to come, and that is this. We love to gather historical data on which we can write a children’s story …

Emilie Toepperwein passed away in 1986 and Fritz left us in 1995. They truly were Texas treasures.

Your ticket for the: The Toepperweins, Texas treasures